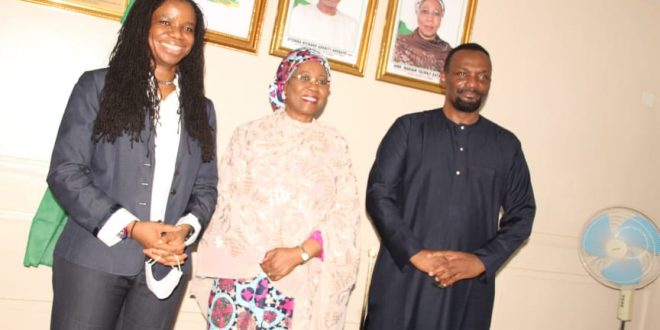 The Minister of State for Industry, Trade and Investment,  Mariam Katagum has described the departure of the outgoing Executive Secretary/ Chief Executive Officer of the Nigerian Investment Promotion Commission, Yewande Sadiku as the end of an era in the organisation.

The minister made this remark in her address at the handing over ceremony on the expiration of tenure of the outgoing Executive Secretary/CEO of Nigerian Investment Promotion Commission in the Minister’s Conference Room in Abuja.

Katagum stated, ” It should also be on record that your departure marks the end of an era at the Nigerian Investment Promotion Commission (NIPC). I know we will all come to appreciate you even more when we try to fill the void that you would have created.”

The minister attested to the exceptional,  strong and proactive character of Sadiku which clearly defined her period as one of remarkable and outstanding achievements by the Nigerian Investment Promotion Commission.

“It is a well-known fact to everybody in the Ministry that has had occasion to interact with you that you have an eye for details. Everyone agrees that you possess a rare combination of vision, fairness, understanding and empathy”, the minister stated.

The minister acknowledged the remarkable friendship developed by the outgoing Executive Secretary/CEO over the years and enjoined her to continue to extend hand of fellowship to the person that will be taking over from her whenever she is being  called upon to do so.

Katagum personally reaffirmed the very cordial relationships she had with Sadiku as one of her supervising Ministers and wished her success in her future endeavours.

The minister urged the Director,Human Resources Management, NIPC, Mr. Emeka Offor who was taking over duties in acting capacity to uphold the principles of transparency,  fairness and follow due process and all extant rules and regulations.

Sadiku in  a joyful mood appreciated  President Muhammadu Buhari for the privilege to serve Nigeria.