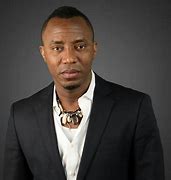 The presidential candidate of the African Action Congress, Omoyele Sowore, has said Nigerians are being suffered with the removal of fuel subsidy by the Federal Government.

Sowore said Nigerians shouldn’t pay more again for fuel and it should be their right.

Sowore said this during an interview on Arise TV on Thursday while replying to a question about his position on fuel subsidy removal.

When asked if he would keep the subsidy despite the deficit budget that might be inherited, he noted the fuel subsidy should not be removed, adding that the policy was only working for the rich.

“Every country in the world was giving the best to their citizens. Norway has some of the best welfare for its citizens. Like free education, free healthcare. Nigeria is the only country at this level of oil producing stage that is punishing its citizens with the lie of oil subsidy. What has not happened is to have a leadership in place that can check the fraud,” he said.

Sowore alleged that many of the companies involved in the subsidy removal in Nigeria were “scammers.”

“They’ve been proven to be scammers,” he said, adding that many of them were facing international sanctions especially those in Switzerland and other places. “They have been made to pay huge fines to the United States Government when they are not even doing the kind of businesses they are doing in Nigeria,” Sowore claimed.

Sowore further said, “Even when you remove the subsidy, they will figure out a strategy again to come back and say they need more. They are holding the country by the jugular until their hands are being removed and have the country control the resources.”

He said he would nationalise the Nigerian National Petroleum Company Limited to follow up on that.

“What they parade as subsidy is how the economic cabals in the system have figured out how to get themselves paid for a job not done. Former president Goodluck Jonathan’s administration was forced to find out that those who were collecting subsidy were not delivering fuel to Nigeria.

“Those of us who have that experience on the lies that have been told to cover up subsidy know it’s a lie that is being told from time to time,” he added.

Suggesting a way forward, Sowore said to have the availability of these (fuel) products, the government should fix its refineries instead of investing in private refineries like that of Dangote in Lagos.

He said, “According to the government, the only product that is subsidised is petrol. Even though diesel, kerosene, and aviation fuel are not subsidised, there is no effect as to any benefit from it. Not only that they can’t be found daily, but their prices also keep fluctuating.”