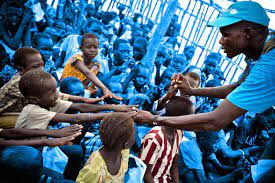 The October 2021 food security and nutrition analysis, known as the Cadre Harmonise, conducted in 20 states in Nigeria and the Federal Capital Territory has revealed that about 12.1 million persons are expected to be in food security crisis or worse situation till December this year.

The UN explained that the ongoing conflict in the North-East and the lingering economic impact of the COVID-19 pandemic had continued to drive hunger in Nigeria.

It said the analysis involved 154,008,198 people, out of whom 12,135,318 in the participating 20 states plus the FCT were currently experiencing crisis and emergency phases of food insecurity.

The report’s provisional results, which were released in Abuja, revealed that the number of people in critical or worse phases of food insecurity might increase to about 16.9 million unless efforts were made to scale up and sustain humanitarian support and other government interventions for livelihood recovery and resilience.

The report read in part, “Crisis level is described as a stage at which, even with humanitarian aid, at least one out of five households in

The target area is characterised with considerable food consumption deficits and acute malnutrition at high or higher rates than the normal.

“It also stands for a situation in which households are marginally able to meet their minimum food needs by depleting assets related to livelihoods, leading to deficits in food consumption.”

The report stated that Borno Adamawa and Yobe were the most affected states.

The analysis estimated that in Borno, Adamawa and Yobe states, which were affected by the prolonged armed conflict, 2.4 million people were currently in the crisis phase or worse and needed urgent assistance.

“These include an estimated 228,707 people in the emergence phase wherein, even with humanitarian aid, at least one out of five households is either facing extreme food deficits, resulting in a very high acute malnutrition or excessive mortality, or an extreme loss of assets relating to livelihoods, causing deficits in food consumption in the short term,” it stated.