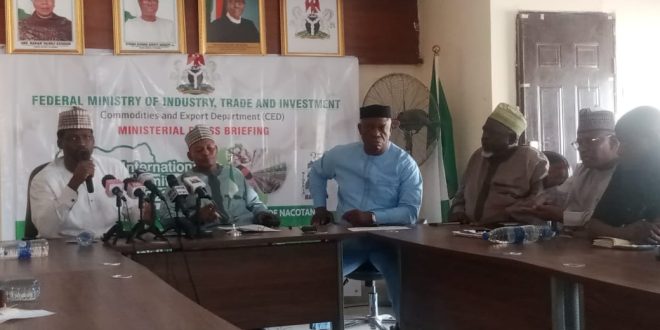 The Federal Government has called for support from the private sector to developing the growth of the nation’s cotton Industry.

The Permanent Secretary, Ministry of Industry, Trade and Investment, Mrs Evelyn Ngige stated this at a media briefing ahead the International Cotton Summit in Abuja which begins today in Abuja.

The event was attended by the President of National Cotton Association of Nigeria (NACOTAN) Mr Anibe Achimugu, and other stakeholders in the cotton value chain.

Ngige who was represented by the Head, Commodities and Export Department in the Ministry, Mr Kaura Iriyime said this became necessary to further boost the nation’s textile and garments Industry.

According to her, the summit is being put together by the National Cotton Association of Nigeria, NACOTAN, in collaboration with the Ministry to celebrate the achievements, particularly the impact of the Association in developing the sector as well as to highlight the giant strides of the government to consolidate on the achievements recorded by the sector.

“It may interest you to note that this event is organized to enable them prove to the whole world the sincerity of Government of Nigeria as a support base for the private sector to thrive, it is therefore my firm expectation that the event which is expected to further lead to a better and deeper win-win co-operation among the stakeholders which will bring more mutual benefits and common development with significant outcomes of more employment generation and wealth creation in the cotton sector” the Permanent Secretary stated

According to her, Nigeria is Africa’s leading cotton producer during the 1960s and 1970s, but now the 6th largest producer in Africa trailing behind Benin, Mali, Burkina Faso, Ivory Coast and Cameroon.

” It is however disheartening to know that Nigeria is not ranked among the top 10 producing countries in the world. In 2010, total production was 602,440 metric tonnes, while production 10 years later (2020) stood at 51,000 metric tonnes according to OECD- FAO statistics and this calls for concern as the dangerous trend may continue if necessary interventions are not applied.

“You may wish to note that cotton is grown in 24 States of the Federation with Katsina leading other Cotton producing states, followed by Zamfara. For the sake of emphasis, Cotton is predominantly grown in the Northern and South Western part of Nigeria” She stressed

Ngige explained that the conference would attract participants from across the world and it will feature presentations, discussions and exhibitions as a side event.