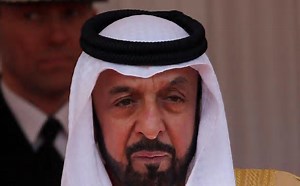 UAE’s long-ailing President and ruler of Abu Dhabi Sheikh Khalifa bin Zayed Al Nahyan passed away on Friday, the Ministry of Presidential Affairs said. He was 73.

The ministry announced a 40-day period of mourning and suspension of work in all ministries and the private sector for three days beginning Friday, including flags to be flown at half-staff.

“The Ministry of Presidential Affairs condoles the people of the UAE, the Arab and Islamic nation and the world over the demise of His Highness Sheikh Khalifa bin Zayed Al Nahyan, the president of the UAE,” the official WAM news agency said in a statement.

Sheikh Khalifa was the eldest son of UAE’s founder President Sheikh Zayed bin Sultan Al Nahyan. He served as the President of the UAE and ruler of Abu Dhabi from November 3, 2004. He was elected to succeed his father who served as the UAE’s first president from 1971 until he passed away on November 2, 2004.

Sheikh Khalifa’s role had been largely ceremonial since he suffered a stroke and underwent surgery in 2014.

His brother and Abu Dhabi’s crown prince, Sheikh Mohammed bin Zayed, has been widely seen as the de-facto leader of the UAE, handling day-to-day affairs for the Gulf state.

Born in 1948, Sheikh Khalifa was the second President of the UAE and the 16th Ruler of the Emirate of Abu Dhabi. He was the eldest son of Sheikh Zayed.

Since becoming the president of the UAE, Sheikh Khalifa has presided over a major restructuring of both the Federal Government and the government of Abu Dhabi.

Under his reign, the UAE witnessed an accelerated development that ensured decent living for the people calling the country home, the Khaleej Times reported.

Sheikh Khalifa steered the development of the oil and gas sector and the downstream industries that have contributed successfully to the country’s economic diversification.

He undertook extensive tours throughout the UAE to study the needs of the Northern Emirates, during which he gave instructions for the building of a number of projects related to housing, education and social services.

Sheikh Khalifa oversaw much of UAE’s economic growth and his name was immortalised on the world’s tallest building, the Burj Khalifa, after bailing out debt-crippled Dubai during its financial crisis over a decade ago.