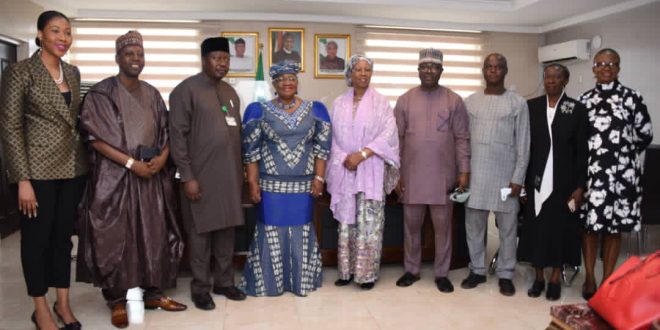 The Minister of State for Industry, Trade and Investment Amb Mariam Katagum has commended the Director General of the World Trade Organisation, Dr Ngozi Okonjo-Iweala for her leadership and tenacity at the WTO.

She made the commendation on Tuesday during a visit by the WTO DG to her office.

Okonjo-Iweala was received by the to management team and officials of the ministry and other agencies of government.

The visit was a follow-up to the 12th WTO Ministerial Conference held in Geneva.

The Minister commended the DG WTO  for her leadership and tenacity that led to the positive outcomes at the recently concluded Ministerial Conference 12 which she described as unprecedented, and  ” a testament to the visionary leadership  provided in your capacity  as the DG WTO.”

She stated that the Federal Executive Council would ensure timely and effective implementation of these outcomes from MC12.

In her remarks, the WTO DG said fisheries subsidy is key to Nigeria.

On vaccine production, the WTO boss is seeking more support from local manufacturers to guard against imports of vaccines and other pharmaceutical products.

These issues were part of a broad discussion on how to improve trade and export while leveraging the opportunities the African continental free trade agreement offers.

Beyond improving trade ties in Nigeria and Africa, Okonjo-Iweala said the WTO is also looking at soaring inflation rates.

In this regard, she says the WTO is taking measures to ensure that all restrictions on food flow to member countries are addressed.

Her visit comes barely a month after the WTO’s Council of Ministers meeting which was held in Geneva between June 12 to 17 with a major focus on improving trade, health, food security, and economic reforms which aim at building economic resilience globally.