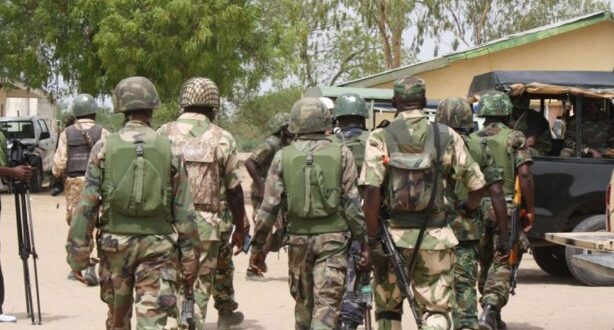 Troops of Operation Hadarin Daji have neutralised two bandits including a notorious bandit kingpin identified as  Bada during separate operations in Zamfara.

Bada was said to have attacked Yar Tashar village market and killed some farmers on October 13, 2022.

He was killed during a gun duel that ensued between the troops and the bandits during an attack on farmers who were harvesting their farm produce last Friday.

The Director, Defence Media Operations, Major General Musa Danmadami, confirmed his death and one other in a statement on Monday.

Danmadami explained that another bandit was killed after he and his colleagues had attacked Gamraki village and kidnapped two persons before the arrival of the troops.

He added that the troops engaged the bandits in a gun battle, and rescued the victims while other bandits ran away with gunshot injuries.

The statement read, ”Troops of Operation Hadarin Daji on  November 6, 2022, responded to a bandit attack at Gamraki village, Kwatarkwashi District of Bungudu Local Government Area, Zamfara State. Troops discovered and engaged bandits who had kidnapped two locals. Troops engaged the bandits, rescued the kidnapped victims, and neutralised one bandit while others fled with gunshot injuries. Troops recovered one AK 47 rifle, one magazine, and two rounds of 7.62mm special among others.

”On the same day, troops also responded to bandits’ attack on farmers harvesting their produce at Yar Tashar village in Maru Local Government Area, Zamfara State. Troops neutralised a notorious bandit kingpin identified as Mr Bada. Bada was said to have attacked Yar Tashar village market and killed some farmers on 13 October 2022. Troops recovered one motorcycle, some weapons, and valuables.”

He encouraged the general public to avail the army with credible and timely information on criminal activities.