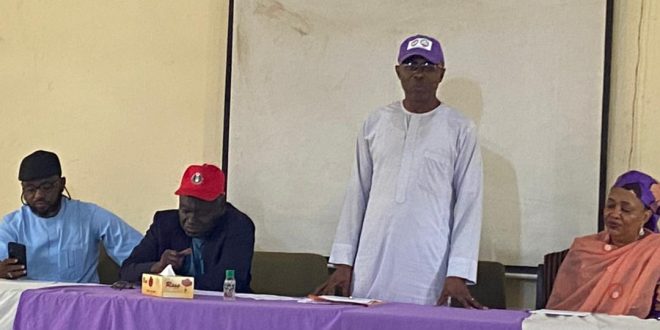 The Corporate Affairs Commission (CAC) under the stewardship of the Registrar General/CEO, Alhaji Garba Abubakar has been described as a decent employer that listens and prioritize the capacity development of employees.

The Director General, Michael Imoudu National Institute for Labour Studies (MINILS), Comrade Issah Aremu stated this in Ilorin while declaring closed a three-day Workshop for Officials and Members of the Senior Staff Association of Statutory Corporations and Government Owned Companies (SSASCGOC ) CAC Branch and members of the Industrial Relations Desk of the Commision.

Issa Aremu further stated that the CAC was a labour friendly organisation and therefore urged the Registrar General to sustain the tempo.

Aremu maintained that cooperation and collaboration was the modern method of resolving labour related issues in organisations around the globe.

He used the forum to applaud the reform initiatives of the Commision which he said would impact positively on Nigeria’s economy.

While speaking on the efforts being made to improve facilities at the institute, Aremu acknowledged the present administration’s efforts at stabilizing the economy.

He recalled that in the midst of Covid-19 pandemic when governments and institutions around the globe were trimming down their workforce in view of dwindling resources, President Muhammadu Buhari resisted the pressure to cut jobs and retained the workforce.

The MINILS DG revealed that part of the efforts being made to reposition the research institute was strengthening partnership and collaboration with the International Labour Organization (ILO) which was established by the United Nations in 1919.

Also speaking, the President, Senior Staff Association of Statutory Corporations and Government Owned Companies (SSASCGOC ) CAC Branch, Comrade Suleiman Girei thanked the Management for organizing the course which he said had broadened the horizon of the participants.

During the event, the participants who took turns to share their experiences about the workshop were unanimous on its positive impact and therefore pledged to utilize the knowledge acquired.

A statement from CAC said that the participants had the rare opportunity to visit the Michael Imoudu Gallery to view amongst others the personal belongings of the legendary labour leader.

The MINILS re-branded ILO approved certificate was presented to participants at the workshop.

The statement was signed by Rasheed Mahe, Head Media, CAC.