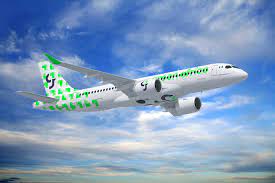 Green Africa Airways Limited has obtained its Air Operator’s Certificate and is set to commence its first commercial flight on Thursday.

Following the AOC received from the NCAA on Monday, a soft launch of the flight was scheduled to commence immediately.

The new airline had in July announced the delay of flight operations due to unforeseen circumstances.

In a statement it issued on Tuesday, the airline said, “Following the successful completion of all five phases of the AOC application process, Green Africa was today presented its Air Operator’s Certificate by Kayode Ajiboye on behalf of Director General of the NCAA, Captain Musa Nuhu, at the NCAA headquarters in Abuja. “With this certificate, Green Africa is able to commence operations in accordance with its initial route network unveiled earlier in June.”

Nuhu was quoted in the statement as saying, “We at the NCAA are impressed with Green Africa’s effort and commitment to safely connect many more people across the country and we look forward to the positive contribution that the new airline will bring to the Nigerian aviation industry.”

The Founder and Chief Executive Officer of Green Africa, Babawande Afolabi, acknowledged the progress as a milestone.

He said, “This is a watershed moment in our journey to use the power of air travel to create a better future.”