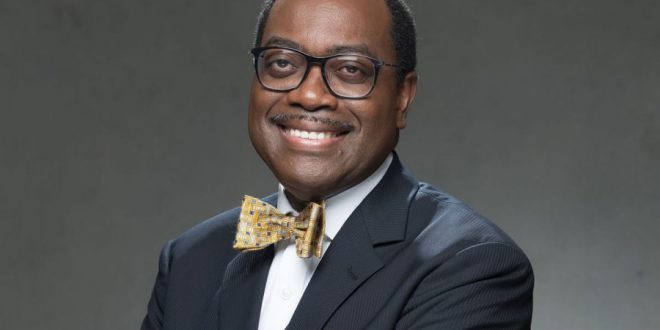 The African Development Bank President, Mr Akinwumi Adesina on Tuesday said that the low tax to Gross Domestic Product rate in the country is not an excuse for the Federal Government to keep increasing taxes.

He said this at a lecture delivered during the annual conference of the Institute of Chartered Accountants of Nigeria held in Abuja.

The conference which is the single largest gathering of Chartered Accountants in Nigeria had as its theme, “Trust in governance.”

The Federal Government had in a bid to boot tax revenue raised VAT from five per cent in February 2020 to 7.5 per cent.

The International Monetary Fund had recently said Nigeria will need to increase its value-added tax (VAT) rate to at least 10 per cent by 2022 and 15 per cent by 2025 from 7.5 per cent now to boost revenues after it recovering from a recession.

But Adesina said while tax to Gross Domestic ratio in Nigeria is relatively low, it is not an excuse to keep raising the tax rates.

He said while other countries with high tax rates have functional free education and free health care system among others, such cannot be said for Nigeria.

For instance, the AfDB Boss explained that in Nigeria, the inefficient system has imposed an implicit tax on the Nigerians as the people are made to provide basic essential facilities that should have been made available by government.

“While progress is being made the challenge, however, is that in many parts of Nigeria, citizens do not have access to basic services that governments should be providing as part of the social contract.

“People sink their own private boreholes to get water. They generate their own electricity oftentimes with diesel. They build roads to their neighbourhoods. They provide security services themselves.

“These are implicit taxes, borne by society due to either inefficient government or government failure. As such, we must distinguish between nominal taxes and implicit taxes — taxes that are borne by the people but are not seen nor recorded.

“It has become so common that we do not even bother to question it. But the fact is governments can simply transfer its responsibility to citizens without being held accountable for its social contract obligations.”

He noted that when citizens bear the burden of high implicit taxes and governments or institutions fail to provide basic services, trust in governance is eroded.

“To build trust with the society, governments must fulfil their part of the social contract, and citizens must also pay their own fair share of taxes. There must be mutual accountability. We must enforce social contracts.

“Participatory governance demands open and transparent governance. Governments should be opened up, citizens have a right to know how public finances are being used.

“This is why I believe that we must develop a ‘People’s Index of Governance’ with citizen accountability forums,” he added.

He called for a lifestyle audit for leaders, adding that when citizens see their leaders living transparently, being sensitive, not lavish in lifestyle but delivering good governance, they will trust governments.

“But when people feel that their resources are mismanaged or being used for opulence, widening the gap between the leaders and those they are leading, it builds distrust and despondency, which then permeates the fabric of society.

“Leaders must not only be accountable; they must live simply. Power is not judged by wealth, but by transforming lives of people. To earn the trust of people, we must create people wealth, not simply personal wealth,” he said.