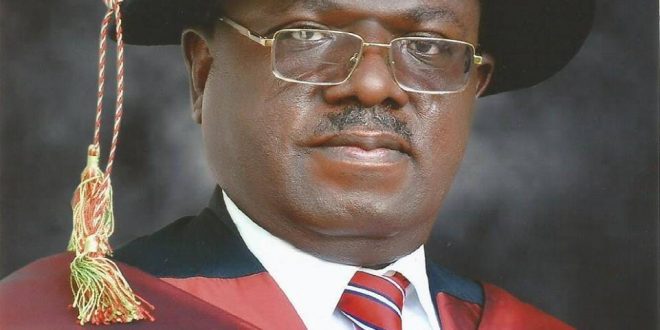 The Chief of Staff to the Governor of Adamawa State,  Prof Maxwell Gidado (SAN) on Tuesday bagged one of Nigeria’s National Awards for his contribution to the growth and development of Nigeria’s economy

Gidado was decorated with the award for the category of Officer of the Federal Republic during an event presided over by President Muhammadu Buhari.

He hails from Sugu in Adamawa State of Nigeria and had his early education at St. Peter’s Minor Seminary Yola, between 1973 – 1977 before proceeding to the University of Maiduguri from 1978 – 1983 where he bagged his LLB (Hons).

He was called to Bar in 1984 and obtained his LLM and Ph.D degrees from the prestigious University of Warwick, England between 1987 and 1992 respectively.

He was the Attorney General & Commissioner of Justice, Adamawa State from 1995 – 1997 and served as the Acting Head, Department of Private Law at the University of Maiduguri from 1997 – 1999.

He also served as the Special Assistant to the Chairman, Constitution Debate Co[1]ordinating Committee, the Hon. Justice Niki Tobi (JSC) a post he held before he assumed work as Assistant Director (Academics) at the Nigerian Law School, Bwari, Abuja.

He was the Senior Special Assistant to the former President of the Federal Republic of Nigeria, Chief Olusegun Obasanjo GCFR, on Legal & Constitutional Matters from 1999 – 2003 before he moved over to the office of the Vice President, Alhaji Atiku Abubakar GCON, in the same capacity from 2003 – 2007.

While in office, he served as Secretary to the Presidential Committee on the Review of the 1999 Constitution and was also on the 13-member Committee to restructure the FCT Abuja.

Prof. Gidado is an author of six books and has over 70 articles published in reputable journals at the National and International levels.

Notable among his books is “Landmark Constitutional Law Cases in Nigeria 2003 – 2007: The Atiku Abubakar Cases”. He holds the National Honours of the Officer of the Order of Republic of Equatorial Guinea (ORG) and he is also a Knight of the Order of Saint Mulumba (Ksm).

In recognition of his contribution to the development of the legal profession in Nigeria, he was conferred with the prestigious rank of the Senior Advocate of Nigeria in 2015 in the academic category.