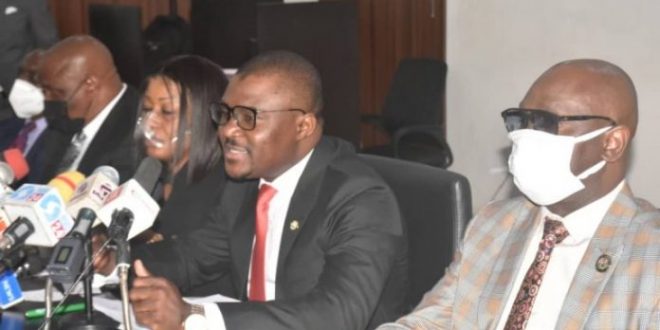 The Lagos State Government on Monday said over N2 billion had been paid as insurance premium for its workers in 2021.

Dr Rabiu Olowo, Commissioner for Finance, made this known in Ikeja at a news conference, on the Lagos State Insurance Week.

Olowo said Lagos State had over 73,000 employees on its database, and they were covered under life insurance.

”I can affirm to you that this year alone, we have paid over N2 billion in insurance premium to cover life and non life. That speaks to the importance of insurance.

”Lagos State Government over the years has continued to insure its staff with regular payment of premium to cater for them during service, and also payment of the death benefits by the insurance companies to deceased beneficiaries,” he said.

The commissioner said insurance was one of the ways the state government managed risk in the state, hence, it was not an issue of optionality.

”Insurance is compulsory in Lagos State for life and non life insurance asset because that is one of the ways we manage a lot of risk.

”We have seen the benefits of engaging in insurance activities, during COVID-19 pandemic and the civil unrest in Lagos,” Olowu said.

The commissioner said it was for this reason that the government had identified the need for more sensitisation and education on insurance, hence, the planned maiden edition of the Lagos State Insurance Week.

According to him, the insurance week, slated for Aug. 23 to Aug. 26, will educate on ways civil servants and the entire populace can key into the abundant opportunities in insurance.

”We have enjoyed the real essence and value proposition of insurance, and the best we can do is to further our commitment to ensuring that our insurance activities are more strengthened.

”That is why we are doing this sensitisation and advocacy and we can see that it pays to pay insurance premium and we will continue to do so into the future,” Olowo said.

He said there was the need to institute the culture of insurance consciousness among government officials and the citizenry as a whole.

Olowo said that the public should know that insurance is the way through which an individual or organisation protect themselves against unfortunate incidents of life, including death.

He maintained that having appropriate insurance cover could not be over emphasised, being the acceptable practice across the globe.

The commissioner said Lagos State Government was already setting the pace in the area of insurance, hence, it was expected that residents also embrace the initiative by taking necessary insurance cover that suit them.

He explained that doing so would help to lessen heavy responsibilities on disasters on government.

”In other words, the cases of calling on government at all times for compensation over some natural disasters or unfortunate incidences can become a thing of the past if we have necessary insurance cover for ourselves, businesses and property.

”By this, the resources at the disposal of government can be channelled towards other developmental projects, instead of paying compensations that ordinarily could have been undertaken by insurance companies,” Olowo said.