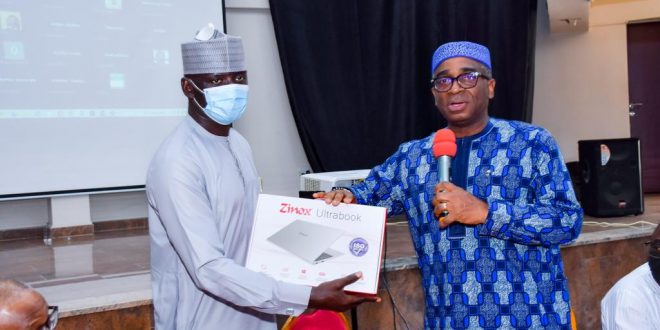 Yakusak Takes Over From Awolowo As NEPC Boss

The new Executive Director, Nigerian Export Promotion Council, Ezra Yakusak has pledged to tackle the rejection of some products exported by Nigerians to foreign markets.

Yakusak made the pledge during his inauguration on Monday at the Council’s headquarters in Abuja.

He pointed out that one of the prominent challenges being faced by exporters was the rejection of exported products in foreign countries.

The Director-General of the NAFDAC Mojisola Adeyeye, had in August said over 76 per cent of Nigeria’s exported agricultural commodities are often rejected by the European Union for not meeting required standards,

“About 76 per cent of our products are rejected by the EU and it is NAFDAC that is informed using the rapid alert systems that these products have been rejected,” she said.

She lamented that aside from the money lost, protecting the image of the country is extremely important.

“We’ve got to work hard to show that we love this country to the extent that we will not bring disgrace to the country from outside,” she said.

But the NEPC Boss assured that his administration intends to put a stop to the trend through capacity building for exporters and the enforcement of product certifications.

He said, “We at the NEPC we already have our Act directing us on what to do we are going to run on that.

“But most importantly, whatever you do in export promotion, if you don’t enhance the capacity of exporters you will still have cases of export rejects. That is what is happening in Nigeria, presently.

“Our exporters go there and their goods are rejected for several reason. So, what we are going to do is embark on capacity building for exporters and we will do that by way of certifications.

“We will look at those issues militating export and we will tackle it.”

He also noted that the federal government will continue to implement the Domestic Export Warehouse programme to ease clearance procedures at the country’s ports.

Speaking on DEW, Ezra said, “It is a laudable project as it ensures that goods being exported reach the ports in no time, so we are going to continue with it.”

Until his appointment, Yakusak, who holds a PhD in commercial law from the Ahmadu Bello University, was the Director, Policy and Strategy, NEPC.

He has also served as Secretary to the Governing Board of the Council. Yakusak will be taking over from Olusegun Awolowo.

The NEPC under the leadership of Mr Olusegun Awolowo has demonstrated in practical and measurable terms, more than at any other time before, its institutional potential as a strategic and effective catalyst for export promotion.

Awolowo was appointed at a time when the NEPC had a moribund strategic plan on how to reposition its operations with a view to realizing its mandate – which is diversification of Nigeria’s economy for sustainable economic growth.

The NEPC under Awolowo developed the Zero Oil Plan in response to the recession in 2016 following the crash in international crude oil prices.  The Zero Oil Plan prepared Nigeria for a world in which crude oil is less relevant. The Ministry of Budget and National Planning integrated the Plan as a core component of the Federal Government’s Economic Recovery and Growth Plan (ERGP), which was launched by the President in February 2017.