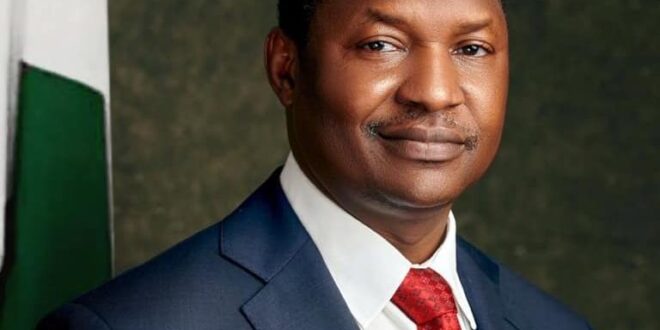 The Director of Finance and Administration in the Office of the National Security Adviser (ONSA) Brigadier General Jafaru Mohammed has written a petition to the Attorney General of the Federal and Minister of Justice Abubakar Malami alleging persecution and victimisation by operatives of the Economic and Financial Crimes Commission.

He described his on- going trial for alleged conspiracy, stealing and money laundering by the EFCC as a witch- haunt and personal vadetta by the Commission’s lead investigating team, CSP Sanusi Allyu Mohammed.

To this end, Jafaru who works directly with the National Security Adviser Mohammed Babagana Monguno ( Retd) in a petition against CPS Mohammed dated 6th May, 2021 addressed to Malami requested the AGF to dispassionately, cause a review of the investigation case against him by a different team under the Attorney General office.

Jaffaru’s petition to Malami was also copied to the Secretary to the Government of the Federation ( SGF), Chief of Staff to the President, Chief of Defence Staff, Chief of Army Staff, the Inspector General of the Police and others.

Titled, “Petition against CSP Sanusi Aliyu Mohammed and his team at the EFCC”, Brigadier Jafaru chronicled his alleged travails, and witch- haunt in the hands of CSP Mohammed in the days of sacked EFFC Chairman, Ibrahim Magu.

He claimed that the development has not only caused him his promotion in the Army, but also led to subjecting his immediate family to harassment.

The petition stated, “In 2020, it was brought to my attention that the then Acting Chairman of the EFCC , CP Ibrahim Magu had initiated an investigation against me for alleged case of conspiracy, stealing and money laundering.

“I enclosed herewith , my response to the EFCC report on the said allegations dated 18 June 2020. l understand there were other reports, which have not been made available to me for up to this day to enable me respond adequately.

“Following an invitation, I voluntarily presented myself for interview before the EFCC, fortified in my belief in the constitutional presumption of innocence and the right to fair hearing.

“Contrary to my expectations, and full cooperation with the operatives of the EFCC, it became clear to me that I am a subject of witch-hunting, personal vendetta, and a pawn in a complex web of power game orchestrated
by the former acting Chairman of the EFCC, CP Ibrahim Magu through his allies, particularly, CSP Sanusi Aliyu Mohammed of the Kano Command of the EFCC.

” I firmly believe that the investigation was part of Ibrahim Magu’s attempt to square up with his perceived enemies in government and has continued to influence his former staff in the use EFCC after his removal from office.

“Notwithstanding the sensitive nature of my office, I presented myself for two consecutive days before the EFCC and was interrogated by a five-man team of operatives for more than 13 hours on each day.

“Unable to substantiate their claim against me and in order to find justification to embarrass and harass me, CSP Sanusi Aliyu Mohammed and his team conducted an unauthorized search of my residence and in the process violated my right to privacy and dignity.

” The all-male team of investigators violated my spouse’s right to privacy by ransacking not only her living quarters but also took time stripping her personal intimate clothing materials inside out against any standards of professional and moral conduct, and in breach of the law”

He said nothing incriminating was found on him after series of investigation by CPS Sanusi.

Jaffaru said about a year after EFCC’s report and forfeiture proceedings commenced, he had been under undue pressure to forfeit properties EFCC investigators believed he own with no evidence.

According to him, concerned that the owners of the properties were showing cause in court why their holdings should not be forteited, CSP Mohammed and his team continued to spread lies against him in the hope that this pressure might lead to a positive verdict for the EFCC in the forfeiture proceedings.

“‘ I have been subjected to media trial at great damage to me and my family by CSP Sanusi Aliyu Mohammed and his team in complete disregard for the protection of national security and
confidentiality.

” Following the removal of CP Ibrahim Magu as the acting Chairman of the EFCC, and desirous of ensuring that the allegation against me is properly investigated , his interim successor,
DCP Mohammad Umar Abba constituted a new team of investigators who would thoroughly and professionally investigate me and my assets and who would not be biased and unprofessional.

“A team was in fact constituted and they conducted their investigation, coming to the conclusion that the allegations were steep suspicion that cannot be backed legally”, he claimed in the petition.

He said nothing was heard in respect of the new team until he was recently requested to report back to the same team in Kano for continuation of the investigation.

Jaffaru said he was convinced CSP Sanusi Alyu Mohammed is not working in the interest of justice and ,is incapable of conducting himself professionally.

” I have thus concluded that some elements within the EFCC are not committed to establishing the truth but are rather involved in a proxy war initiated by CP Ibrahim Magu.

“I have been subjected to untold hardship, psychological trauma, and disruption in my career progression as a result of the mishandling of this investigation.

“The Honourable Attorney General may wish to note that as a result of the false reports and the media trial I was subjected to, I was denied promotion to my next rank in the Nigerian Army in December 2020 under the justification that I was under investigation”, he said.

He urged Malami to , in the interest of national security and the sensitive nature of his work and the functions of the Office of the National Security Adviser, to urge EFCC to desist from unauthorized release of information to the media and to prevail on EFCC , ” to show a single shred of evidence to the source of the funds upon which a case of fraud is being built against me”.

Explaining it’s decision to get an interim forfeiture order to seize about eight choice landed property allegedly owned by Jafaru, the EFCC said it acted on intelligence that a serving top military officer was in the habit of acquiring high-profile properties and had floated companies that owned similar assets.

The Commission said upon preliminary investigation by a special task force team constituted in its Kano office to investigate the intelligence, the team found that Gen. Mohammed, who joined the Nigerian Army in October 1993, could not have legitimately earned enough to acquire the properties allegedly linked to him.