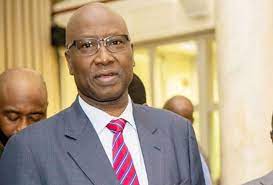 FG Agrees To Cut Share Of Revenue Allocation Formular To 50.65%

The Federal Government appears to have finally bowed to pressure to reduce its share of revenue allocation from the Federation Account with a new proposal which was submitted to the Revenue Mobilization, Allocation and Fiscal Commission.

The proposal was submitted by the Secretary to the Government of the Federation, Mr. Boss Mustapha on Tuesday at a town hall meeting on the review of Nigeria’s vertical revenue allocation formular.

The Revenue Mobilization Allocation and Fiscal Commission had in June commenced the process for a review of the nation’s Revenue Allocation Formula.

The 1999 Constitution of the Federal Republic of Nigeria (As Amended) empowers the Commission to periodically review the Revenue Allocation Formulae and Principles in operation to reflect changing realities.

Consequent upon this constitutional mandate and the obvious changing realities in the nation’s socio-cultural, political and economic environment since the last review in 1992, the Commission commenced the process of reviewing the subsisting vertical revenue allocation formula.

The review is targeted at equitable distribution of the accrued revenue into the federation account to the three tiers of government and this is expected to be concluded by December this year.

The federation account is currently being managed on a legal framework that allows funds to be shared under three major components-statutory allocation, Value Added Tax distribution; and allocation made under the derivation principle.

Under statutory allocation, the Federal Government gets 52.68 per cent of the revenue shared; states, 26.72 per cent; and local governments 20.60 per cent.

The framework also provides that Value Added Tax revenue be shared thus: FG, 15 per cent; states, 50 per cent; and LGs, 35 per cent.

Similarly, extra allocation is given to the nine oil producing states based on the 13 per cent derivation principle.

Speaking at the event, the SGF said the Federal Government has keenly followed all the geo-political consultative process, adding that review of revenue formular cannot be an emotional or sentimental discussion that would be done arbitrarily.

Mustapha said all over the world, revenue and resource allocation have always been a function of the level of responsibilities attached to the different components or tiers of government.

He said based on the second schedule of the Nigerian constitution, there are 68 items on the Exclusive Legislative List, and these are areas in which the Federal Government is supposed to use resources accruing to the federation to provide services and related development needs.

On the other hand, he said the 30 items on the Concurrent List requires both the Federal and State Government to address.

The SGF explained further that for Nigeria to have an endearing vertical review of the present revenue allocation formula, stakeholders must first agree on the responsibilities to be carried out by all the tiers of government.

Similarly, the he stated that within the Consolidated Revenue Fund, disbursements are made for debt servicing, statutory transfers, salaries, pension and gratuities, capital supplementation amongst others.

He said, “It is, therefore, clear from the above that the Federal Government spends most of its resources on and for the state and local government levels.

“When you juxtapose this with the equally greater number or responsibilities on the Exclusive Legislative List, you would even want to make a case for greater allocation to the Federal Government.

“However, the Federal Government has taken cognizance of the growing clamour for a review of the present vertical revenue allocation formula. President Muhammadu Buhari is commitment to ensuring resources for development get to the poorest of the poor in our rural communities, imperative to incorporate local communities in our security architecture as well enhancing equitable and inclusive national development.

“Alongside the above, other considerations that informed the Federation Government’s position on the review of the present vertical revenue allocation formula included Federal Government’s increasing visibility in Sub-national level responsibilities due to weaknesses at that level.

“It is important to restate that revenue allocation should be done constructively in the face of dwindling national revenue base and the imperative for states to generate their IGR. Equally important is the fact that this review should culminate in improved national development.”

He said further that just as the amount of money put into a project is a function of what the project entails, so should any review of the vertical revenue allocation formula be consistent with the constitutional responsibilities of all the tiers of government.

“Until such a time that the constitution is fully reviewed and more responsibilities are taken out of the Exclusive Legislative List, we might not be able to arrive at an equitable, unbiased and sustainable vertical revenue formula agreeable to all,” he added.