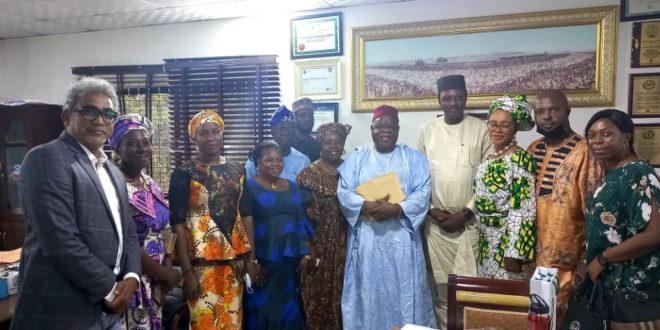 The National Mushroom Growers, Processors and Marketers Association Of Nigeria is poised to take a fair share of the world mushroom market for the Country.

Chief Michael Awunor, President Of the Association gave this indication when he led the Local Organizing Committee for 2021 Mushroom Week to the Headquarters Of the National Institute for Hospitality and Tourism (NIHOTOUR).

The President, according to a statement signed by Mr. Babajide Iletogun, Media Consultant, National Mushroom Growers, Processors and Marketers Association Of Nigeria, cited the 2018 report of the Food and Agriculture Organization (FAO) which put the world Mushroom market at $45billion with China having about 46% of the total supply and consumption.

According to Chief Awunor the present production of a mere 1.5million metric tons of mushroom in Nigeria is unacceptable in the light of the need to diversify the nation’s economy.

The President therefore disclosed that his Association is determined to secure for Nigeria, at least, 10% of the world mushroom Market in the next two years.

Chief Awunor expressed optimism that the goal of his Association was realistic if 10% of Nigerians consume at least 1kilo of mushroom per month. At the end, 20million kilograms of mushroom would have been consumed.

He observed that the market for mushroom is huge and has so much potential to contribute to the growth of the the Nation’s Gross Domestic Products (GDP).

Furthermore, the President revealed that Mushroom has proven medicinal benefits and if properly harnessed along its value chain, holds a lot of promise to provide employment for the growing number of youths in the country.

Towards this end, the Association has instituted a National Mushroom Week intended to sensitize the populace of the tremendous nutritional, medicinal and economic benefits of mushroom.

Chief Awunor therefore solicited for the partnership and collaboration of National Institute for Hospitality and Tourism to ensure the success of the Mushroom Week.In particular, the President requested the Institute to sponsor the Menu Competition that will feature during the week and also be the Chief Judge Of the event.

He disclosed that the National Council for Arts and Culture, Director, Commodities and Export Department, Federal Ministry Of Industry, Trade and Investment and the wife of the Chinese Ambassador to Nigeria are to serve as judges.

Responding, Nura Sani Kangiwa(Turakin Kebbi), the Director General, National Institute for Hospitality and Tourism gave an assurance that his Institute was willing to work with the Mushroom Association to undertake a sensitization campaign for increased mushroom production and consumption across the nooks and crannies of the country.

Towards this end,the Director General General called for the constitution of a joint committee of the Association and the Institute to draw up a framework for collaboration beyond the Mushroom Week

Nura Sani Kangiwa , who himself says he is a farmer, offered to be a member of the Association and promised to deploy both his official and personal influence to drum up support for the Association.

The statement said that 30th November,- 3rd December, 2021 has been set aside for the Mushroom week

Previous Naira sinks to 530 against dollar, pound hits N720
Next Understanding the Purpose and Implementation of Escrow Account