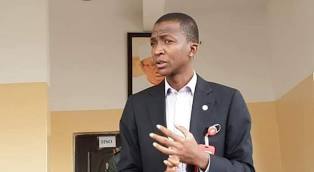 The Chairman of the Economic and Financial Crimes Commission (EFCC), Mr. Abdulrasheed Bawa, has given the indication that the commission has spread its dragnet beyond three listed governors.

Bawa said that the three governors are not the only ones under the watch list of the anti-graft agency in connection with money laundering.

He spoke while fielding questions from State House Correspondents at the Presidential Villa in Abuja after a meeting with President Muhammadu Buhari on Thursday.

However, Bawa did not disclose the the number of those being monitored by the commission apart from the earlier three governors saying he didn’t want to be misled.

The EFCC Boss had said two weeks ago that three governors were in the watch list of the commission in connection with money laundering.

He spoke shortly after the CBN made a proposal to redesign and reissue some higher denominations of the Naira.

On Thursday, he said that the number of governors being monitored by the commission has increased.

He said, “You are mixing two things. EagleEye is an app. It’s a novel  idea of the EFCC that we launched for the ease of reporting crime to us. Nigerians can easily download it on their phones, either Android or Apple or whatever. And then of course, they can send in complaints to us through The EagleEye, you can even take pictures and send.

“Let me use this opportunity to remind Nigerians that EagleEye is very important for those that are reporting the hoarders of these currencies that we know are out there. So that is one.

He described the plan to redesign and reissue of  the Naira as a critical step in the fight against financial crimes in the country.

According to him, the massive currency stashed away from the control of the CBN has made it difficult to track down financial crimes.

He, again, defended the decision of the CBN to redesign the Naira describing the move as the only way to get control of the nation’s currency in circulation.

“For politicians the message is very clear. Of course you know, they should sell themselves, they should talk about issues. We want to hear about how they are going to solve the problems, not what the problems are.

“I think it is very important and I think they are doing that. And then of course we encourage that they shouldn’t use illegitimate funds in their campaign finances and all of that.”