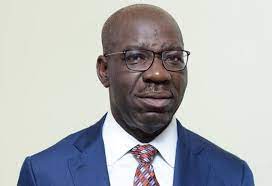 In fulfilment of the new minimum wage regime announced on Workers’ Day, Governor Godwin Obaseki has paid the Workers’ May salaries and pension, reflecting the new wage increase.

The Secretary to the State Government, Osarodion Ogie, disclosed this via a statement issued on Thursday.

“The Governor of Edo State, Mr. Godwin Obaseki has approved the payment of retirees’ pension and workers’ salaries for the month of May, reflecting the new N40,000 minimum wage,” the statement read in part.

This is in fulfillment of the statutory obligations to workers and also a reflection of the governor’s expert and judicious management of the state’s resources.”

Obaseki had on May 1 announced the increment of the minimum wage in the state from N30,000 to N40,000. He noted that the increase was necessary to help workers overcome the country’s overbearing economic challenges, which have caused galloping inflation among other socio-economic dislocations.

Previous 2023: PDP ready for hitch-free National Convention — Mark
Next I will support you to achieve victory, Tambuwal assures Atiku