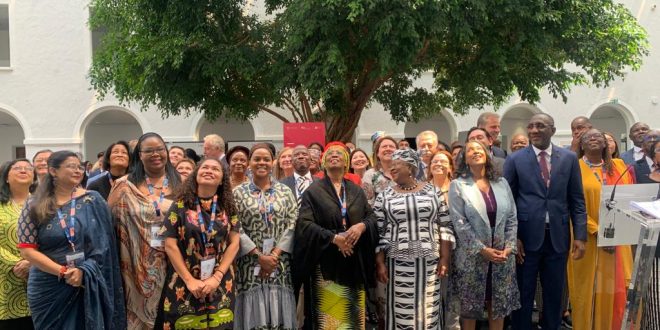 The  Minister of State for Industry,Trade and Investment, Amb. Mariam Yalwaji Katagum  who led the Nigerian delegation to the 12th WTO Ministerial Conference  in her written statement on behalf of the Federal Government had earlier commended the Director-General WTO, Dr. Ngozi Okonjo-Iweala on the structured modalities of sessions which would provide members with a constructive way of engagement on the identified priority areas, which among other things included, WTO response to the pandemic and TRIPS waiver, Food crisis, Fisheries Subsidies, Agriculture Reforms and WTO reform.

On WTO response to the pandemic, the Minister stressed on the need to deliver outcomes geared towards addressing the food and livelihood difficulties faced by emerging economies through provision that would foster economic recovery and the building of resilient health and economic sectors.

She called on Trade Ministers to develop on institutional framework that would foster discussions toward the delivery of outcomes that would address the needs of Members while any discussions on WTO reform would need to adhere to the principles of transparency, inclusiveness, fairness and equity within the balance of the rights and obligations of all members under the covered Agreements.

She therefore called on the membership to ensure that any future discussions on reform focus on reaffirming and strengthening the multilateral character of the WTO.

On Fisheries Subsides Agreement, MC 12 agreed that no member shall grant or maintain any subsidy to a vessel or operator engaged in illegal, unreported and unregulated (IUU) fishing or fishing related activities in support of IUU fishing; no member shall grant or maintain subsidies for fishing or fishing related activities regarding an over- fished stock; each member shall notify the committee in writing on an annual basis of a list of vessels and operators that it has affirmatively determined as having been engaged in IUU fishing, among others.

On Emergency response to Food insecurity,the Ministerial Conference agreed that trade along with domestic production plays a vital role in improving global food security in all its dimensions and enhancing nutrition;  commit to take concrete steps to facilitate trade and improve the functioning and long term resilience of global market for food and agriculture, including cereals, fertilizers and other agricultural production inputs and  particular consideration will be given to the specific needs and circumstances of developing country Members especially those of least-developed and net food – importing developing countries.

The Ministerial Conference is the topmost decision making body of the World Trade Organization (WTO)which usually meets every two years and it brings  together  all members  of the WTO to  take decisions on all matters under any of the multilateral trade agreements.

It would be recalled that Kazakhstan was originally scheduled to host MC12 in June 2020 but the conference was postponed due to  the  outbreak of COVID-19 pandemic; while this is the first conference held since the appointment of Dr. Mrs. Ngozi Okonjo- Iweala as the new  Director- General,WTO.