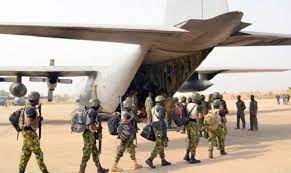 The Defence Headquarters said that about 57,004 members of the Boko Haram terrorist group have surrendered to security agencies within a two weeks period covering May 19 to June 2.

It explained that during the period under review, about 47 terrorists were killed in various military operations.

In a statement signed by the Director, Defence Media Operations, Maj. Gen. Benard Onyeuko, the achievements followed the operations of the Armed Forces of Nigeria, Police and other security agencies across the six geo-political zones of the country.

The statement revealed that at least 40 terrorists were arrested while 152 civilians were rescued during the period.

The statement said, “Troops of Operation of ‘Hadin Kai’ has continued to sustain the operational tempo against the insurgents and terrorists in the North West.

“Notably, on 12 June 2022 troops had an-encounter with Boko Haram terrorists as they cleared their enclave in Gazuwa in Bama Local Government Area.

“The camp which is called Markas or Headquarters harboured large of the terrorists and their families. After a fierce battle about 47 terrorists were neutralized including their top commanders.

“Also, on 14 June 2022, troops of 26 Task Force Brigade on clearance operation at Ngoshe Borno State intercepted one of the abducted Chibok girls by name Miss Mary Dauda, 27 years old with her child.

“She is suspected to have escaped from Gara in Gwoza Local Government Area of Borno State. Mary Dauda is on serial 46 on the Chibok girls list of 2014. The rescued mother and child are in own custody for medical checkup and rehabilitation.

“Furthermore, on 6 June 2022 troops rescued 5 abducted victims who were kidnapped by the terrorist. Earlier in the day, terrorists had set ablaze 2 PMS tankers and 2 other vehicles.

“This was achieved in conjunction with Air Component of who engaged the terrorists with helicopter gunship some of the criminals were neutralized and the 3 gun trucks abandoned by the terrorists were recovered.

“All surrendered and items recovered have been handed over to the appropriate authorities for further action.”