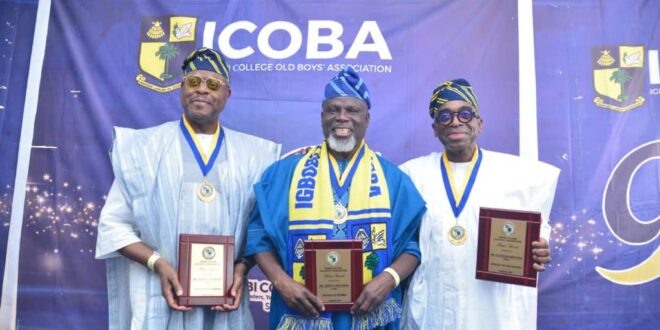 Igbobi College Honours Awolowo With Service To The Nation Award

For his contributions to the development of the Nigerian economy, the Board of Trustess of the Igbobi College Old Boys Association has honoured the immediate past Executive Director of the Nigerian Export Promotion Council, Mr. Olusegun Awolowo with the service to the nation award.

Awolowo was recognized at the 90th annual luncheon and merit award of the Association.

Awolowo had distinguished himself in various positions which he held in the public service.

He served in the Federal Capital Territory Administration as Secretary for Social Development, Area Council Services and later Secretary of Transport where he played a significant role in evolving a master plan for an efficient urban transportation system in the FCT.

He also served as Special Assistant on Traditional Institutions, Legal Due Diligence and Legal Matters under Chief Olusegun Obasanjo’s administration.

He was the Executive Director/ Chief Executive Officer of the NEPC serviving two terms in office between September 2013 and October 2021.

Under his leadership at the NEPC, the agency pursued the ambitious Zero-Oil Plan as an economic blueprint for Nigeria non-oil sector to become a major contributor to the nation’s Gross Domestic Product.

This Plan forms part of the Federal Government of Nigeria’s Economic Recovery and Growth Plan.

His goal with the Zero Oil Plan is to increase export capacity by ramping up production, shifting the focus from exports of raw produce to value added products in order to increase foreign exchange revenue, promote the value of Nigerian products & services internationally, create jobs and improve lives through the sustainable eradication of poverty.

Under his leadership, NEPC won the IT’s prestigious World Trade Promotion Organisation (WTO) 2018 Award, for the Best Initiative to Ensure That Trade is Inclusive and Sustainable.

Awolowo is the current Country Head of Delegation to the United Nations Centre for Trade Facilitation and Electronic Business.

He represents Nigeria on a standing basis, as well as provide a mechanism to ensure effective public-private partnership in this UNECE programme and its monitoring by member States.