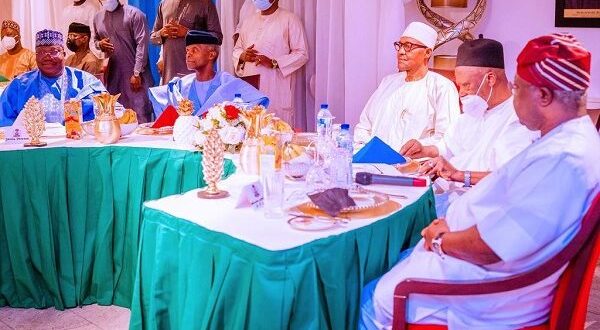 Presidential spokesperson, Femi Adesina, has revealed why President Muhammadu Buhari refrained from imposing or naming a consensus candidate for the All Progressives Congress as his successor.

He said the ruling party’s special convention and presidential primary that produced the former Lagos State governor, Bola Tinubu, as the party’s flagbearer was a litmus test for the President, hence his neutrality.

Adesina, who is the Special Adviser to the President on Media and Publicity, stated these in a piece titled, ‘Knock, Knock! Who’s there?’.

The presidential spokesman said despite his indication that he had a favourite candidate, the President walked the talk of his promise that he would leave a legacy of a free, fair and credible process for the country.

Adesina added that while one of Buhari’s predecessors in office allegedly imposed his successor, the President was nondiscriminatory and allowed due process to take order of the day.

He wrote, “Let me first talk of the last one week that led to the primary election of the APC. In an interview he granted in January, this year, President Muhammadu Buhari had indicated that he had a favorite candidate. Would he name the person? He balked, saying he would be exposing the individual to too much risks, including possible elimination.

“It was human to have a favorite in such situation, and the President did no wrong. But would you unduly favor the person? Would you throw your weight around, ride roughshod over the others, and impose your favored one on your political party and the nation? We have seen it before. Former President, Olusegun Obasanjo, did it with Umaru Yar’Adua. He did same, though to a lesser extent with Dr Goodluck Jonathan. Can Buhari do it and remain a democrat, fair, impartial? Knock, Knock! Who’s There?

“That was the matter of interest in the week before the primary election. There were at least 23 aspirants. Who would the President give the nod? Could he remain neutral, non-aligned? At least, he had confessed he had someone in mind. Would he remain even-handed, detached, non-discriminatory?

“The main thing on the agenda was usually who would be the preferred aspirant. What part of the country would he come from? Would the President name his favorite, or leave it to democratic principle of voting? How did the President do it? How did he remain neutral, when he had earlier confessed that he had a favorite? It’s a test of fairness, being a democrat or not, and the President passed it, despite all the odds.

“Each time a consultative meeting ended, there were twists and contortions to whatever the President said. They imported and imputed all sorts of interpretations, mostly unfounded and incorrect. Oh, this is what he meant. He said this and that. This is what he was actually saying. He just didn’t come straight. The man held his peace.

“Primary Election Day came. And the President still remained neutral, despite having confessed that he had a favorite aspirant. How did he do it? Strange. Supernatural. Curious. Knock, Knock! Who’s There? But President Buhari remained unobtrusive, demure, self-effacing, till a candidate finally emerged.

“While the process lasted, I had observed people who were core Buharists, but now on different sides of the divide, go for one another’s jugular. Some were virulent, odious, descending to the level of indecency. But now that the race is over, can they sheathe their swords? Is there anything in life that should make us become indecent, uncouth in both language and action? Fie! Fie, I say.

“The day of decision will come in February. May God spare us till then, and beyond. President Buhari has done his level best for his party, and the country. He has been beleaguered by some forces and interests since 2015, and it had largely been about the quest for power. He is exiting decently, orderly, doing his best till the last day. The onus is now on Bola Tinubu, Atiku Abubakar, and the other candidates to answer the ring at the door. Knock, Knock! Who’s There?”