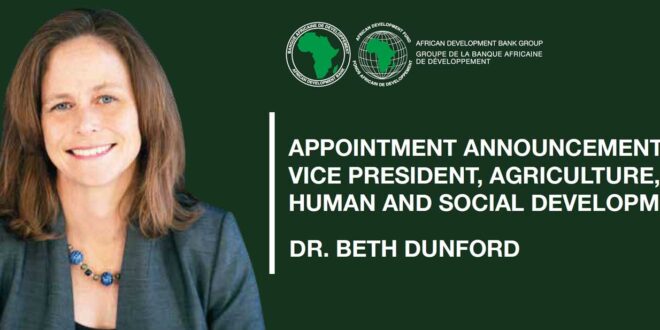 Dr. Dunford, a national of the United States of America, brings extensive experience to this role. She has held senior level leadership positions in the US government where she managed large and complex programs, working with the private sector, civil society, and multilateral and bilateral institutions, as well as with African governments, to deliver agricultural, social and human development impact at scale.

Prior to her appointment, Dr. Dunford worked as the Assistant to the Administrator in the U.S. Agency for International Development’s (USAID’s) Bureau for Resilience and Food Security, as well as the Deputy Coordinator for Development for Feed the Future, the U.S. government’s global hunger and food security initiative. In this dual role, she coordinated Feed the Future across multiple U.S. government agencies, oversaw $1 billion annual budget and leveraged millions of direct private sector investment annually.

In this capacity, she also coordinated $2.3 billion Feed the Future presidential initiative across 11 U.S. government agencies and forged partnerships within the private sector and civil society targeted at reducing hunger and poverty. She also led USAID’s technical and regional expertise focused on improving agriculture-led growth, resilience, nutrition and water security, sanitation and hygiene.

A career member of the senior foreign service at USAID, Dr. Dunford previously served as Director of USAID’s Mission in Nepal, leading the U.S. government’s health, education, agriculture and environment programs as well as its contribution to Nepal’s massive earthquake recovery and reconstruction effort. She also worked in Afghanistan as Agriculture and Alternative Livelihoods Program Director, USAID/Afghanistan, where she directed agriculture, resilience and emergency food assistance programs.

Dr. Dunford has also served in Ethiopia as Director, Office of Assets and Livelihoods, USAID/Ethiopia, where she led government officials, scholars, donors, and NGOs to craft the program, now a model used worldwide to map how emergency and development operations can collaborate to build communities’ resilience to recurrent crises.

Beth also held a number of roles in Washington, including Deputy Assistant to the Administrator in the Bureau for Food Security and Senior Development Advisor to the Secretary of State’s Special Representative to Afghanistan and Pakistan. Dr. Dunford also worked as Senior Policy Advisor, Office of the Chief Operating Officer and as Regional Development Advisor, East Africa, USAID/Washington.

Commenting on her appointment, Dr. Beth Dunford said: “I am excited to join the African Development Bank Group and be part of the senior management team. I am passionate about the Bank’s development agenda that has attracted global attention as bold and innovative for accelerating Africa’s development. I am honored to be part of the team to further achieve social and economic transformation on the continent”.

Dr. Dunford holds a Ph.D. in Sociology (2003), an M.A. in Sociology (1999), both from Michigan State University, USA and a B.A. in Political Science from Northwestern University (1990), USA. She is fluent in English and French.

Commenting on the appointment, the President of the African Development Bank, Dr. Akinwumi A. Adesina said, “I am delighted to appoint Dr. Beth Dunford as Vice President to lead the Bank’s work on Agriculture, Human and Social Development.

Beth is a strategic and effective leader with deep knowledge and impressive track record in designing and delivering highly impactful large-scale programs that have helped in lifting 27 million people out of poverty in 36 countries. With over 20 years experience working and delivering programs globally with a focus in Africa, she brings hands-on leadership and drive that will further accelerate our work to deliver greater development impacts”.