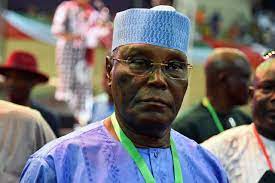 Against the backdrop of a bleak economic future for Nigeria painted by the World Bank recently, the Peoples Democratic Party Presidential Campaign Council has said the report justifies the need to have its candidate, Atiku Abubakar, elected president of the country to address the nation’s many challenge

In earlier report, quoted Alex Sienaert, World Bank’s lead economist for Nigeria, as saying that in 2023, debt servicing will gulp 123.4 per cent of the country’s total revenue.

Sienaert had stated this in a presentation titled ‘Nigeria Public Finance Review: Fiscal Adjustment for Better and Sustainable Development Results’ for the month of November.

“Borrowing more is not the solution: debt costs are rising rapidly, squeezing non-interest spending,” he said, adding that “debt servicing has surged over the past decade and is expected to continue increasing over the medium-term, crowding out productive spending.”

Responding in a statement to the presentation, spokesman of the campaign council, Senator Dino Melaye said, “The solution to the years of the locusts under APC is Atiku Abubakar, who worked under a team that brought great economic prosperity to Nigeria.

“The APC presidential candidate is always eager to dissociate from Buhari, but he carries a DNA that is infused with the APC blood and water. What can he do differently?  Besides, if he had a different solution he could have offered it to his failed party so as to pave a smooth way for his own emergence. Having ‘chilled’ with the big boys, he now wants to ‘chill’ alone.

“Nigerians should look forward to the termination of APC’s arrested development when Atiku/Okowa and the PDP return Nigeria to its winning ways. As President Obasanjo said in his famous aphorism, there is no need to reinforce failure.

“What the World Bank report has done is an economic advisory, which Nigerians have to take seriously by looking away from APC and embracing the People’s Democratic Party on February 25, 2023.”

According to the statement, “the recent report by the World Bank, confirming the arrested development experienced under the All Progressives Congress administration since 2015 has more than any other indices, justified the imperative of stopping APC from doing further damage to Nigeria’s economy and social advancement in 2023.

“The APC inherited a healthy economy in 2015, just a year after Nigeria’s economy was re-based, and rated as the largest economy in Africa, ahead of South Africa. Rather than consolidate on the gains recorded by the PDP administration, Buhari and the APC embarked on unprecedented economic amateurism that has thrown Nigeria into one of the least performing economies in Africa. The APC has also thrown Nigeria into such a huge debt doldrum that it would take the country years of creative management to regain lost grounds.

“The APC which premised its campaign on change has succeeded in taking Nigeria back more than 10 years. While they accused their predecessors of corruption, they have now made corruption a state policy and the stench in the high corruption quotient of APC provokes deep revulsion.”

The statement further read, “Nigerians will not forget the great prosperity under the PDP administrations. They can also not forget how the reversal of fortune under APC has brought Nigeria down from prosperity to poverty, resulting in the relegation of Nigerians to a nation of 133 million poor citizens.

“If only Nigerians understood what the APC meant by change! The prodigal son scores better when peered with the APC.

“Sadly, the poor performance of the APC is not limited to the economy. Insecurity has degenerated by a higher degree. Unemployment is at its worst. The energy crisis remains intractable and unaddressed.

“The Buhari administration and APC are now relying on the Department of State Services to make fuel available to Nigerians. The subsidy programme that came under heavy criticism by APC has not only been sustained but has become an indefensible and convoluted policy in which the supposed poor now pay higher for fuel than the obviously rich. While fuel sells for about N180 in the cities, the rural folks buy the same product at about N300-500 per litre.”