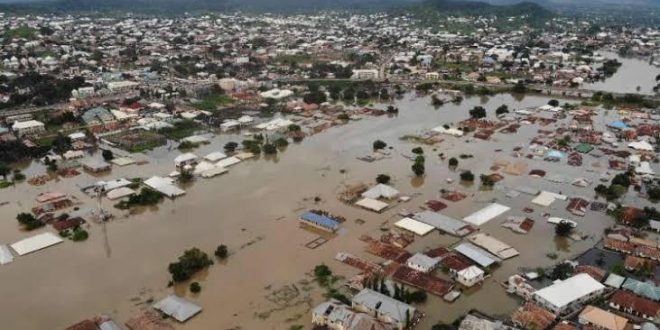 The Minister of Humanitarian Affairs, Disaster Management, and Social Development, Hajiya Sadiya Umar Farouq has stated that farmers who lost their lands and other means of livelihood to flooding will be compensated.

Farouq said this during the 56th session of the State House Press Briefing which was held on Thursday.

She spoke on the steps being taken by the Federal Government through the Ministry, and its Agencies in the provision of palliatives and emergency assistance to Nigerians that have been impacted by the recent floods that affected various regions of the country.

The Minister said that the flooding has wreaked havoc in 32 states of the federation and the Federal Capital Territory, with 612 persons reported dead. She added that a total of 3,290,780 persons were affected.by the incident, 1,427,370 persons displaced and 2,776 others injured.

The Minister assured farmers of compensation, noting that a Presidential Committee on food security is working in that direction.

She said, “Now, we are doing the assessments of those farmlands that are destroyed and we will submit our report to the Food Security Council. So, once that is done, we will know the next step to take but definitely, farmers will be compensated. Those that lost their means of livelihood will also be compensated accordingly.”

On the infrastructures being put in place to prevent future occurrences, the Minister said, “Yes, I think the relevant ministries are working on this. We have a plan in place, a flood emergency preparedness plan is in place and we have started operationalizing that plan. That plan has just been approved by the Federal Executive Council in September this year.”

Speaking on the claims that the palliatives made for the displaced people are being looted, the Minister said there have yet to be an official complaint received by her office on that.

“We have not received any official complaint on this (looting of palliatives). But I assure you that we have engaged the services of security agencies to support us and secure our warehouses in the States. And when we are doing even the distributions, they are present there. I have not received any official complaint of looting. But we will go back and ask questions.

“I’m not aware of any diversion. It’s not even possible now that we are engaging everybody, everybody is aware of what is coming to that state before it even arrives. So, it will be very difficult for any diversion.”

While responding to a question on the $1m provided by the United States for immediate humanitarian assistance to support Nigerians affected by the recent flooding in the country, Farouq said that the ministry had yet to receive such fund.

She added, “I don’t know where that money was taken to, it has not come to my ministry. Honestly, it is important to know that some of these partners rather do things themselves.

“We have not received $1m as a ministry, from any organization. What the UN agencies do, they sometimes ask us about our area of concern. We give them and they go themselves to do this intervention. So, I’m not aware of this, because it has not come to me officially or even to NEMA I don’t know.”