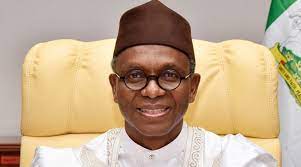 Governor Nasir El-Rufai of Kaduna State has appointed his deputy, Dr. Hadiza Balarabe as the Chairman of Governing Board of the Kaduna State Geographic Information Service, the digital land registry.

A statement by the governor’s Special Adviser on Media and Communication, Mr Muyiwa Adekeye, in Kaduna on Friday said his principal gave the approval of the newly constituted governing board.

The statement adds that Dr Zaid Abubakar, who is the Executive Chairman of Kaduna Internal Revenue Service, represents the service, and Accountant General Shizzer Bada is the representative of Ministry of Finance.

He further said that Madam Altine Jibrin, the Director General of KADGIS and Alhaji Mahmood Aminu of KADGIS are both on the board, as well as representatives of the Ministries of Justice, Environment and Local Government and that of the Ministry of Agriculture.

The statement also said that the representative of Kaduna Chambers of Commerce, Industry, Mines and Agriculture is on the newly constituted KADGIS board.

The Special Adviser noted that “KADGIS is one of the first agencies established in 2015 by the El-Rufai government, with the mandate to digitise the land registry and exercise responsibility for land administration in the state.”

Previous Why I won’t attend COP27 climate summit – Sunak
Next Again, FG Moves To Safeguard Lake Chad From Drying Up