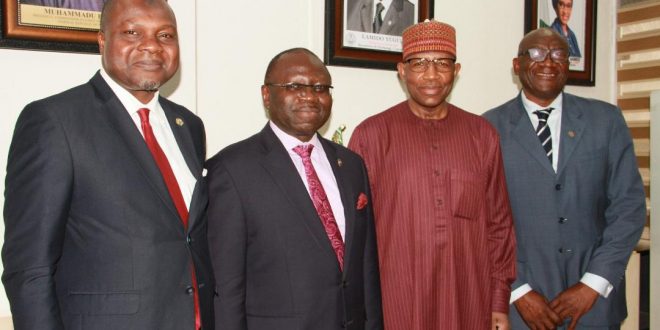 Relevant stakeholders have been urged to co-operate with the Securities and Exchange Commission its its desire to help bridge the infrastructure gap in the country.

Director General of the SEC, Mr. Lamido Yuguda stated this during a meeting with the new executives of the Chartered Institute of Stockbrokers in Abuja, weekend.

Yuguda said the capital market is capable of attracting finance that would assist the nation bridge the current infrastructure deficiency.

According to him, “We have huge infrastructural deficit in the country like insufficient power, lack of good roads among others. We want our country to have good infrastructure and I know this is possible with the help of the capital market and other stakeholders.

“It requires adequate planning and financing and we can achieve it as a nation. The capital market through the private sector can fund road construction while government focuses on other issues”.

The SEC DG however stated that for the capital market to attain full potentials, all stakeholders need to ensure they carry out their functions with integrity and fairness in a bid to restore investor confidence.

He commended the new leadership of CIS and assured them of the support of the Management of the Commission for a successful tenure.

The SEC boss acknowledged CIS as a key partner in the Commission’s regulation of the market and assured that the SEC would continue to provide the needed support.

“On behalf of the Board and staff. We will give you all possible co-operation you desire to make your job easy.

We are here to support this market and make it the market we all desire”.

Yuguda stated that derivatives trading has commenced for people who want to manage their risk adding that the SEC is working to increase the literacy of Nigerians so they can take better decisions.

“The future for this country is bright and we have the young population to push it. We can have a much better standard of living than we have now and we hope you will continue to give a lot to the market.

“We are committed to any initiative that will further spur the growth of the capital market. We also have a review of the ISA Bill pending at the National Assembly and that bill has a lot that will revitalize this market”he added.

In his remarks, President of CIS, Mr. Oluwole Adeosun commended the SEC for the relationship that exists between the Commission and the Institute and thanked the Management for always supporting the CIS.

“Thank you always because you have embraced the institute and made it clear that you desire a very harmonious relationship and we are happy about it.

“You have shown this in your actions since you came into office and we appreciate you for all your efforts  and we pray that investors benefit greatly from their investments in the Capital market. Thank you for all your support to the CIS Bill.

Former President of CIS, Mr. Olatunde Amolegbe thanked the DG for the efforts the Management has been making to support the CIS, adding that the Institute has been able to function effectively due to the support of the SEC.

He assured that the CIS bill which is  current before the National Assembly will get to the final ending and assented to, adding that the  bill will stand as a testimony of the quality of leadership that the SEC has  brought to this market.

“That bill will usher in a fresh hope for the capital market.

Thank you very much for making my tenure as President one that can be classified as a success. Without your co-operation we would not have been able to push a lot of things we did, we hope it will get stronger” he stated..Show more