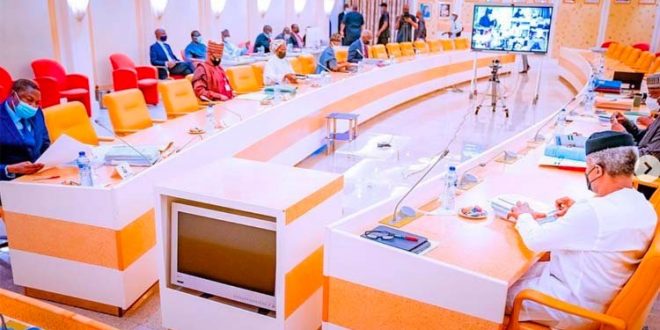 The Federal Executive Council on Wednesday approved N21,107,212,510, for various projects in the education and aviation ministries as well as a few other federal agencies.

The approvals were made at a meeting of the council presided over by President Muhammadu Buhari .

The Minister of Aviation, Hadi Sirika; Minister of State for Education, Chukwuemeka Nwajiuba; and the Special Adviser to the President on Media and Publicity, Femi Adesina, briefed State House correspondents of the outcome of the meeting.

Sirika told reporters that the council approved four memoranda for his ministry, which totalled N16.7bn.

According to the minister, the projects to be executed in the contracts include the construction of Wachakal Airport in Yobe State at N6.3bn; post construction services for the same airport at the cost of N219.8m; procurement of eight airport rescue and firefighting vehicles at the cost of N9.5bn; and a contract for the deployment of sniffer dogs to the Lagos and Abuja international airports at the cost of N658.8m.

He said, “FEC approved four memoranda from civil aviation. One of them is approval for the construction of Wachakal Airport in Yobe State and at the contract sum of N6,284,065,056.”

Nwajiuba, on his part, said the council approved a memorandum in favour of the Federal University of Petroleum Resources Effurun, Delta State, for the construction of facilities, including hostels, at the cost of N2.7bn.

Previous MDAs failed to account for N4.97tn in 2019, AGF tells Senate
Next NIMASA to create wealth for Nigeria through sea wreckage recycling