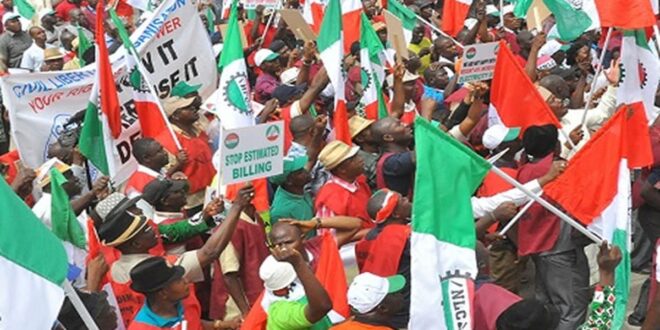 The Nigerian Labour Congress has insisted that there is no going back on its campaign against alleged anti-labour practices of the Kaduna State Government.

The President of the Congress, Ayuba Wabba, addressing its members in the state on Monday, said that there is ‘no retreat, no surrender’ as the five-day strike for both public and private organisations in the state, commenced today.

“There is No retreat and no surrender for us. If he is a reasonable person, he should have known that this issue is one that affects the lives of citizens.

“The railway is closed, airport is closed, yet we have somebody that is a tyrant and said he is fighting back.

“We are aware of the COVID-19 restrictions and that is why we have tried to make sure that the guidelines are respected.

“All over the world, even in the midst of COVID-19 when the fundamental human rights of citizens are violated, citizens are allowed to protest.

The industrial action by the Congress is aimed at condemning the decision of the State Government to layoff thousands of civil servants.

The strike has gained momentum, based on the support received from relevant institutions in the state.

For example, the Transmission Company of Nigeria, on sunday had cut off the bulk electricity supply within the state.

General Manager, Public Affairs, of TCN, Ndidi Mbah, confirming the power interruption, said that there had been intense pressure from the Union demanding that all 33kV feeders radiating from its substations within Kaduna State be switched off.

She said, “Regrettably, the Union functionaries returned today with similar demands amid palpable threats that could escalate and jeopardize national grid security.

“It was during this morning’s encounter that the System Operators were forced to shut down the  33kV feeders from 6:36Hrs this morning.”

TCN also noted that KADCO had earlier shut down its 11kV feeders, which it started de-loading from 3am on Sunday.

Also, the Nigeria Union of Petroleum and Natural Gas Workers (NUPENG), and Aviation workers had announced plans to shut down operation in the state in line with the NLC’s directive.

Previous Nigeria’s Forex Reserves Drops To Lowest Level At $34.57bn
Next Only 1,648, Not 7,770 Workers Were Sacked— Kaduna Government