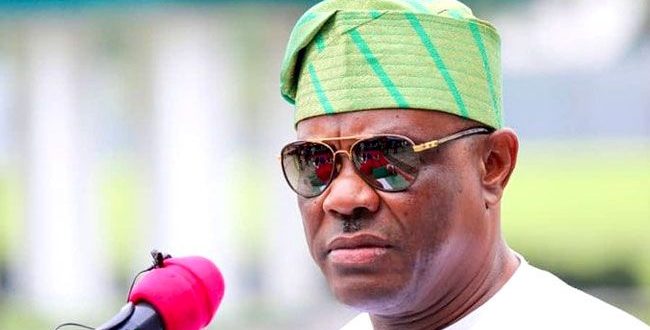 The national secretary of the Peoples Democratic Party, Samuel Anyanwu, has said that Governor Nyesom Wike of Rivers State has made “immense sacrifice for the sustenance of the party.”

Anyanwu, in a statement issued in Owerri, Imo state, on Tuesday by his spokesperson, Ikenna Onuoha, said he never made comments against Wike in regards to the crisis rocking the party.

The PDP national scribe said that the media report quoting him that he had distanced himself from the Rivers state governor was completely false, malicious, and an extreme act of wicked mischief by desperate power seekers.

The statement disclosed that Anyanwu had briefed his lawyers to commence legal action against the writer.

The statement partly read, “The attention of the National Secretary of the Peoples Democratic Party, Senator Samuel Anyanwu, has been drawn to a fictitious report in some section of the social media, claiming that he granted a media chat during which he purportedly stated that he had distanced himself from Governor Nyesom Wike of River State.

“The said report is completely false, malicious and an extreme act of wicked mischief by desperate power seekers who seek to pitch Sen. Anyanwu against Governor Wike and cause disaffection in the PDP for their selfish gain.

“For the avoidance of doubt, Sen. Anyanwu did not grant any form of media interview, chat or interaction whatsoever at the Cathedral of Transfiguration of Our Lord Owerri before, during or after the celebration of the 80th Birthday Anniversary of a foremost nationalist, Chief Emmanuel Iwuanyanwu.

“As such, he could not have made any statement on Governor Wike as purported by the said report.

“It is, therefore, shocking that the writer of the fabricated report went to the extent of concocting fictitious quotations and ascribed same to Sen. Anyanwu just to give his libelous story a semblance of fact.

“For emphasis, Sen. Anyanwu is a highly cultured leader and had never made any undesirable comment on anybody let alone Governor Wike, a highly respected leader and critical stakeholder in the PDP.

“Sen. Anyanwu, as the National Secretary cannot, has not, and will never distance himself from any leader in the Party let alone Governor Wike, who remains a prominent leader of our party who has made immense sacrifice for the sustenance of the Party.

“In any event, our investigation has revealed where this reprehensible report emanated from. Information at our disposal showed that the writer, Chuks Egemba, was an appointee of the ill-fated seven month’s administration in Imo state.

“We are also aware of how huge sums of money has been released to hack writers to tarnish Sen. Anyanwu’s image and bring him to disrepute in the eyes of the public and among his political associates.

“Such individuals are fighting a lost battle as they cannot diminish Sen. Anyanwu’s soaring popularity in Imo State by means of lies, fabrication and fake news.

“The National Secretary has already instructed his lawyers to commence necessary action with security agencies for redress over this libelous report in line with our extant laws including those against dissemination of fake news.

“We urge the public, leaders and members of the PDP and the media to disregard the said report as completely false and product of the twisted imagination of a wicked soul and their sponsors.”