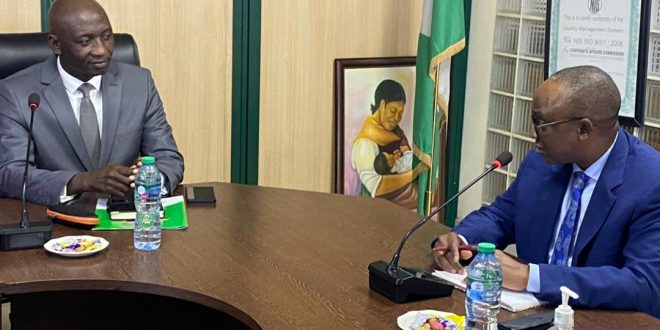 The Corporate Affairs Commission (CAC) has pledged continued support to the Nigerian Export Promotion Council (NEPC) as it strives to improve online services to grow the Non-Oil Exports sector.

The Registrar General/ CEO of the Corporate Affairs Commission, Alhaji Garba Abubakar stated this today in Abuja when he received in audience, the Executive Director/ CEO of the NEPC, Dr. Ezra Yakusak.

Alhaji Garba Abubakar, in a statement by Rasheed Mahe, Head Media, CAC stressed that the Commission had ensured series of collaborations with sister government agencies, in a bid to promote growth in various sectors of the economy.

He added that in order to ensure seamless interface, the Commision granted Application Program Interface (API) to several Embassies and Agencies which include the Federal Inland Revenue Service (FIRS) and Bureau of Public Procurement (BPP) amongst others.

The CAC Boss stressed that the Commision was further building synergy with some regulatory agencies particularly on inactive status of some companies to encourage compliance.

While stating that such synergy would soon include verification with National Identity Management Commision (NIMC), the Registrar General cautioned against submission of manifestly false information to the Commision as it was liable to two years imprisonment under the provisions of CAMA 2020.

Garba Abubakar also stated that in line with the ease of doing business initiatives of the present administration, companies now had the choice to make all their post incorporation filings directly to the Commission without going through agents after due creation of Entity Electronic Account (EEA).

Earlier, the Executive Director/CEO of the NEPC, Dr. Ezra Yakusak said the visit was to amongst others seek collaboration particularly on improving their online interface for seamless operations.

Ezra Yakusak informed the RG that although the NEPC had digitized its operations to address procedural hurdles in non-oil export business, collaboration with the CAC was critical to export facilitation.

He revealed that from 2017-date the council had registered 23,000 exporters and added that CAC’s support would enable them transform some of its current manual processes to digital.

The NEPC scribe used the forum to applaud the Commission’s reform initiatives aimed at promoting ease of doing business.