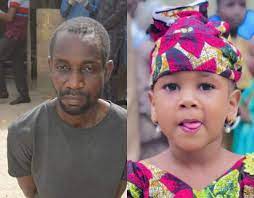 A Kano State High Court has sentenced Abdulmalik Tanko and Hashim Isyaku to death by hanging following their conviction for kidnapping and culpable homicide.

Abdulmalik Tanko and two others were charged for criminal conspiracy, kidnapping, confinement, and culpable homicide contrary to sections 97, 274, 277, 221 of Kano State Penal Code 1991.

Delivering the judgement on Thursday, Justice Usman Na’abba ruled that the prosecution proved beyond reasonable doubt that the defendants criminally conspired to abduct and murder five-year-old pupil, Hanifa Abubakar.

Tanko alongside Hashimu Isyaku and Fatima Musa, who lives at Tudun Murtala Quarters, Kano, were facing a five-count charge along with the other two accused persons, of criminal conspiracy, attempt to kidnap, abetment, kidnapping and concealing dead body.

The prosecutor, who is also the Attorney General of Kano State, Barr. Musa Abdullahi-Lawan, informed the court that sometimes in November 2021, the defendants conspired and kidnapped the five-year-old Hanifa while she was returning from Islamiyya school.

He alleged that Tanko, the proprietor of Nobel Kids Comprehensive College, Kano, had on Dec. 4, 2021, kidnapped and held Hanifa hostage in his house situated at Tudun Murtala for days and killed her with poison.

“In the process, the second defendant Isyaku buried her in a shallow grave in the premises of Northwest Preparatory School situated at Kwanar Yan Ghana, Tudun Murtala, Kano.

“On Dec. 27, 2021, the third defendant Musa wrote a letter to the victim’s family, on behalf of Tanko, demanding the sum of N6 million as ransom.”

Abdullahi-Lawan told the court that the prosecution will present four witnesses or more to prove their case on the next adjourned date.