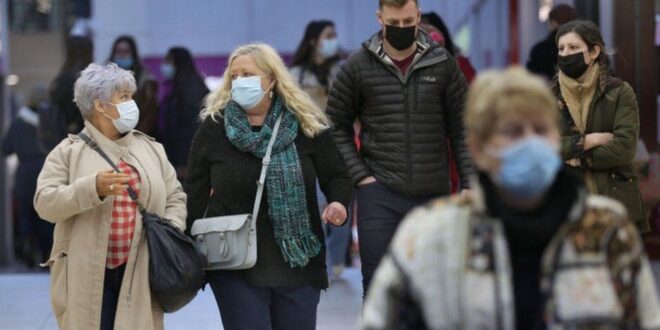 The UK economy rebounded last year with growth of 7.5% despite falling back in December due to Omicron restrictions, official figures show.

It was the fastest pace of growth since 1941, although it came after a dramatic 9.4% collapse in 2020 as the pandemic forced parts of the economy to shut.

In December, the economy shrank 0.2% as Omicron restrictions hit the hospitality and retail sectors.

Chancellor Rishi Sunak said the economy had been “remarkably resilient”.

The figures howed that in the last three months of 2021 growth was 1%, which ONS director of economic statistics Darren Morgan said was “pretty healthy” given Omicron’s spread and the introduction of some restrictions.

The figures were stronger than expected, and Mr Morgan told the BBC the expansion in 2021 showed the UK was the fastest growing economy in the G7 group of nations. However, he urged caution about making strict comparisons.

“The growth in 2021 comes from a low base in 2020, when the economy fell sharply,” Mr Morgan said. “And if you look at where the UK economy is now, compared to its pre-pandemic level… the UK is middle of the pack, compared with the G7.”

He said using this comparison, the US, Canadian and French economies were above the UK’s, while the UK was above Italy, Germany and Japan.

Downing Street is unlikely to avoid the opportunity to boast about 2021. During its hosting of the G7, the UK is now confirmed as the fastest growing economy of these major nations.

But that comparison needs a great dollop of context.

The 7.5% growth the UK economy recorded in 2021 is the highest of the G7 major economies and that does indicate a strong bounceback.

This, as the ONS points to, should be seen alongside the sharpest fall of 9.4% for the UK compared to those same economies in 2020. On the internationally comparable basis, the economy is still slightly smaller than it was at the end of December 2019, unlike the US, France and Canada. On the slightly more timely basis, using monthly data not available in other countries, the UK economy is larger than it was in February 2020.

The UK economy grew by 1% in the final quarter of 2021, a little lower than expectations, as the spread of the Omicron variant weighed on the economy in December.

But as ever during these extraordinary times, this already looks like a rear view mirror on events. Looking forward, the extraordinary cost of living squeeze, with energy and other prices leading to falls in average living standards, is the significant iceberg for the economy in 2022.

Previous CBN To Stop Sale Of Forex To Banks By December
Next Nigeria Can Repay Its N35.5trn Debt, FG Tells IMF