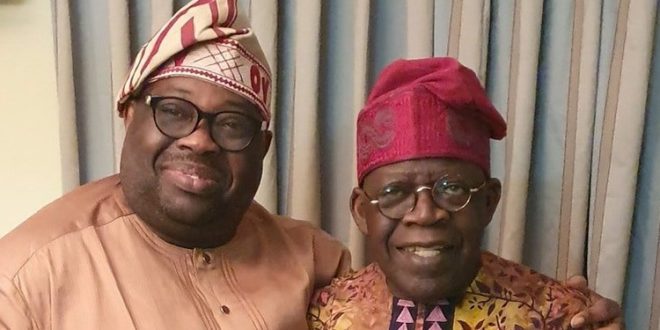 Your Support For Buhari Has Turned You Into A Shadow Of Yourself, Dele Momodu Replies Keyamo

The Director of Communications for the Peoples Democratic Party Presidential Campaign Council, Dele Momodu, gave his reasons for opposing the candidacy of the All Progressives Congress standard bearer, Bola Tinubu.

Momodu in a statement on Tuesday said he loved ‘the man Tinubu’ but disagreed with ‘Tinubu the politician’.

He claimed that Tinubu had declined over the years, adding that he was no longer a man of his people, and that his allies could not tell him this “truth” for pecuniary gains.

Momodu, in his statement titled ‘FESTUS KEYAMO AND HIS ERRATIC VITUPERATION’ , also took a swipe at the APC campaign spokesperson, Keyamo, who had earlier written a piece concerning Momodu, where he said the latter was executing a job to impress his paymasters while tackling the APC.

“I have just read Festus Keyamo’s response to my critique of the APC manifesto of lies. I’m not surprised that all he could do was yell as usual without examining or practically addressing the content of my article. Unfortunately, he picked on a wrong customer.

“Let me take a few minutes to educate this young friend of mine who has since become a shadow of his old self since he was offered an appointment, that makes him look so incompetent, by the President, Major General Muhammadu Buhari (retd.).

“What did Festus say I did wrong? He quoted copiously from an article I wrote about two years ago, which the Tinubu media teams have been using to campaign endlessly, because they have no stronger voice of their own. I’m indeed flattered.

“There is no doubt that I love Tinubu the man but I disagree vehemently with Tinubu the Politician. This is not the first time I will say it publicly. Since I now have the opportunity of presenting the bones of my disagreement with Tinubu, courtesy of Festus Keyamo, I will lay them bare.

“Tinubu has declined in the last few years. I used to see him as a man of his people but no supposed generalissimo would ever abandon his people in the days of trouble and tribulation. None of the people around him could tell him the truth for pecuniary reasons,” Momodu said.

Momodu claimed that Tinubu wanted Presidency by all means, even after losing many of his “foot soldiers.”

“He knows it himself but he desperately wants to be President of Nigeria, by fire by force, after he has lost most of his formidable foot soldiers, and now relying on outsiders to activate and actualise his lifelong ambition for him, which is his legitimate right. But Nigerians have the right to scrutinise his action plans.

“When he was a governor, I supported him from the distance while he surrounded himself with some people who pretended to love him. When he was busy distributing land to journalists in Lagos, I refused to collect my papers because I love my freedom, the reason I was able to tell him truth regularly.

“When he was to be impeached for some infractions, and many of his so-called loyalists were washing off their hands clean, like the Biblical Pontius Pilate, my very dear friend, Tokunbo Afikuyomi, stood by him like the Rock of Gibraltar,” Momodu added.

The Atiku/Okowa spokesperson said Tinubu’s biggest sin was the fact that he went quiet when the APC became a totally hopeless case, “just because he is hoping to inherit Buhari’s structures.”

“Lastly, I hope he would have the energy to make himself available for a rigorous scrutiny of his manifesto. He wants to renew what actually? He wants to turn Nigeria into another Lagos? Many of those who love him genuinely know that the demystification process has started,” he added.