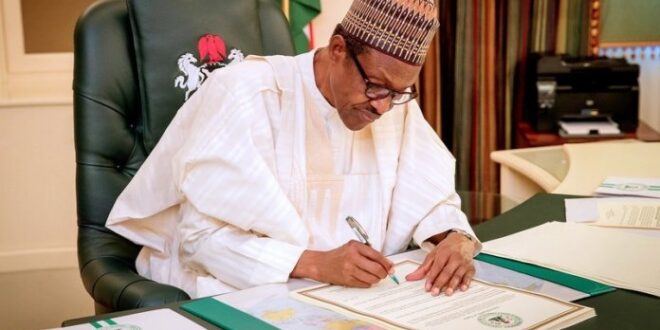 President Muhammadu Buhari has signed the 2023 Appropriation Bill into law.

Buhari signed the 2023 transition budget Tuesday morning at the Council Chambers of the Presidential Villa, Abuja, in the presence of Vice President Yemi Osinbajo, Senate President Ahmad Lawan, Speaker of the House of Representatives, Femi Gbajabiamila, and other members of the Federal Executive Council.

Speaking at the event, the President said his administration would speed up critical infrastructure projects nationwide as it raced toward the finish line on May 29, 2023.

He noted that the budget is N21.83 trillion aggregate expenditure, an increase N1.32 trillion over the initial executive proposal of N20.51 trillion.

The Senate President, Ahmad Lawan, had revealed to journalists at the weekend after a closed-door meeting with Buhari at the Presidential Villa, Abuja, that the President would sign the 2023 budget Tuesday.

Lawan said, “We are looking forward to Mr President signing the Appropriation Bill 2023, by the grace of God, on Tuesday.

“This because we signed the documents yesterday, having lost some time because of some anomalous figures we had in the bill presented to the National Assembly.

“But thank God, the National Assembly, in both chambers, has passed the Appropriation Bill 2023 on Wednesday, and I’m sure that Mr. President and his team, on the executive side will work on what we have done. And the first thing on Tuesday, the first official working day of the year, I believe that Mr. President will be signing the Appropriation Bill 2023.”