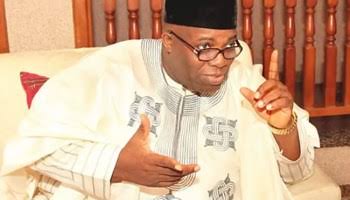 The Federal High Court, Maitama, Abuja has passed its verdict on the Director-General of the Labour party presidential campaign council, Doyin Okupe, saying he will spend two years in prison on 26 count-charge bordering on money laundering.

Okupe is a former Senior Special Assistant on Public Affairs to the then President Goodluck Jonathan,

Okupe and others were prosecuted by the Economic and Financial Crimes Commission (EFCC) on charges bordering on alleged money laundering and criminal breach of trust to the tune of N702million.

On Monday, Justice Ijeoma Ojukwu agreed with the prosecution that he diverted public funds through the Office of the former National Security Adviser, Sambo Dasuki totalling about N240m.

The court found that rather than receiving funds through cheques, he kept receiving more than 5 million in cash contrary to the money laundering act.

However, the judge gave him leverage to call witnesses before 1:45pm today (Monday) to defend himself.

Those who came to defend him were his wife and son and they pleaded for leniency.

In her judgement, Ojukwu sentenced Okupe to 2 years imprisonment each on count 34 to Count 39.

But she said the imprisonment will run concurrently.

The judge gave Okupe till 4:30pm to comply with her judgement particularly the fine or be remanded in prison following his conviction.