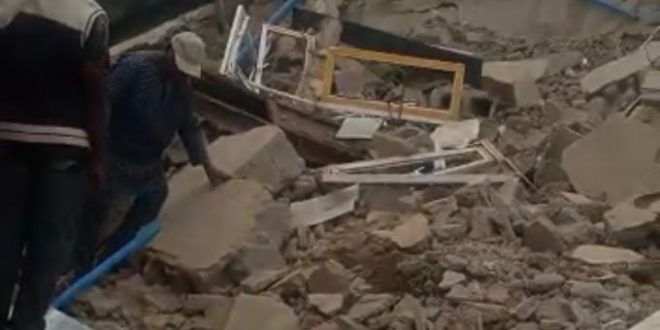 A two story building has collapsed in Kubwa, Abuja.

The Network gathered that the building collapsed around 11:30 pm on Thursday when the residents were already retiring to bed after the day’s activities.

Ivestigation revealed that the building located at Hamza Abdulahi Street, Kubwa, was initially designed to be a commercial plaza but was converted a residential accommodation.

It was learnt that the managers of the building demarcated it into rooms and rented it out.

A resident said that a man, his wife and four children are trapped in the building.

The family, still buried in the rubbles, was said to be occupying an apartment on the middle floor.

The residents say that a total of seven people are said to be trapped in the building while three people were rescued and rushed to the hospital for treatment.

The source said that fire service Operatives of the Fire Service, the National Emergency Management Agency and other agencies are coordinating the ongoing rescue efforts.