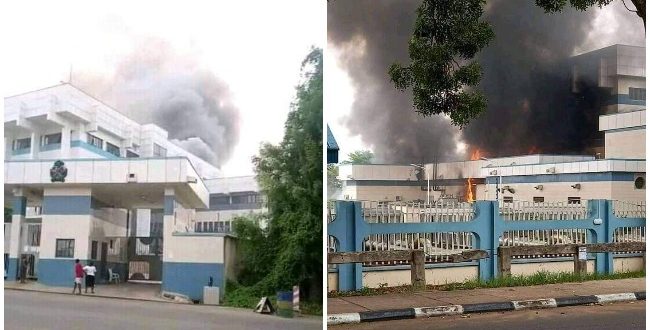 The Central Bank of Nigeria has ordered a probe into the cause of the fire incident at its Makurdi branch on Thursday.

There was a fire incident at the Makurdi branch of the Central Bank of Nigeria in Benue State.

A portion of the bank went in flames in the early hours of Thursday.

There were reports that the fire started at the back of the bank which is located in the Old GRA area, Makurdi, Benue State capital.

But reacting to the incident, the apex bank said in a statement made available to THE WHISTLER that no life was lost.

The statement signed by the CBN Director of Corporate Communications, Osita Nwanisobi Director, said that an investigation has commenced to unravel the causes of the fire.

It reads, “A minor fire occurred at our Makurdi Branch at about 7.00 a.m. today, Thursday, April 21, 2022, and was swiftly checked moments after it was detected.

“The prompt response of the Bank’s security and facility management units as well as support from the Benue State Fire Service helped to fight the fire and prevented any damage the fire might have caused to the main office building.

“Reports indicate that the fire started from the fuel dump behind the branch building sending smoke into the atmosphere. Fortunately, there were no fatalities and the affected site has since been cordoned off for further investigation.

“Normal work has also continued at the branch. We hereby assure the general public that the minor fire that occurred has been effectively put out and no damage was done to the Makurdi branch of the Bank.”