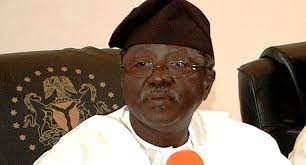 A Plateau State High Court sitting in Jos on Friday discharged and acquitted a former Governor of the state, Jonah Jang, over the N6.3 billion corruption charges levelled against him by the Economic and Financial Crimes Commission

The court presided over by Justice Christy Dabup also discharged and acquitted a former cashier in the office of the Secretary to the Plateau state government, Yusuf Pam, who was accused alongside the former governor.

A former cashier in the Office of the Secretary to the State Government (OSSG), Yusuf Pam, was arraigned alongside the ex-governor.

Jang and Pam were sued for alleged criminal breach of trust and misappropriation of Plateau State funds to the tune of N6.3 billion.

The court had on Thursday, July 14, 2022 adjourned for judgment after the adoption of final written addresses by the prosecution and defence counsel.

Counsel for Jang, Mike Ozekhome SAN, had argued that the case lacked merit, contending that the prosecution did not prove its case beyond reasonable doubt.
On Friday, Justice Christy Dabup discharged and acquitted the duo.