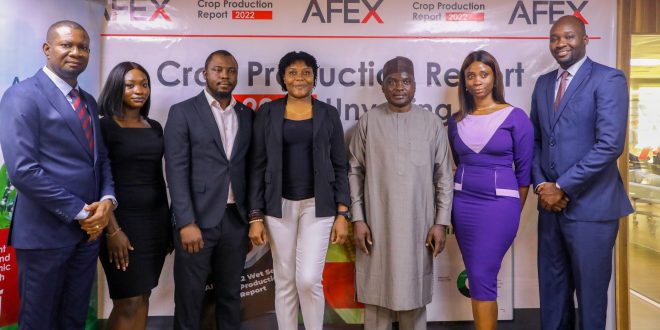 Nigeria’s leading commodities market player AFEX unveiled its 2022 Wet Season Crop Production Report in a hybrid event hosted at the AFEX office in Abuja on the 16″ of November 2022. The report which seeks to provide accurate reliable data to aid the understanding of national food system through farmer survey measurement of transaction level data tracks six key commodities and their performance preceding season.

As reflected in the report price and market changes across maize paddy, sorghum, soybean, cocoa and sesame have been affected both by predictable seasonal effects and activities in the agricultural value chain as well as larger macroeconomic and events.

The 2022 Wet Season Crop Production Report forecasts an average decline in production of up to 11.5% across commodities like maize paddy rice sorghum, and cocoa, while soybeans and sesame will experience a close to 6.5% increase in production levels, Nigeria’s most consumed grains are currently faced with declining food balance sheets as consumption levels rise than production levels, worsening food insecurity.

He also specified key indicators measured through survey stating that “Factors such as land usage, inputs (quality of seeds and fertilizer us weather conditions, and the farmers’ output expectations were put into primary consideration.”

Also, soybean price is projected to rise by 6% by May 2023 The projected price hikes across commodities in the report were also tied majorly to incidence flooding resulting from incessant rainfall in key producing regions. This is indicated to heighten the gap between production and output levels by farmers.

Effects of the Russia-Ukraine crisis continue to be felt in the local agricultural commodity market especially because of the hike in the price of fertilizer. This negative impact was also highlighted in the report as affecting the output level of most commodities.

The report forecasts paddy being the most susceptible to production and output pressures, facing close to a 22.47% in production volumes this year in the wake of the crisis-induced fertilizer price hike.