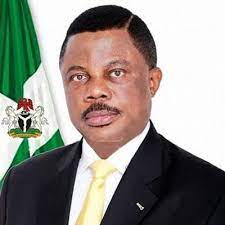 Governor Willie Obiano of Anambra State government has threatened to close down any bank that refuses to open for business in the State on Monday and Tuesday following the sit at home order by the Indigenous People Of Biafra (IPOB).

The order was to mourn those that lost their lives during the invasion of Mazi Nnamdi Kanu’s country home at Afaraukwu Umuahia by the Nigeria Army.

This was contained in a statement signed by the Secretary to the State Government Professor Solo Chukwulobelu.

It governnment directed all banks in the state to open for business as adequate security reinforcement will be provided for them.

Obiano ordered all the banks with branches in major markets across the state to make sure that those branches open accordingly for the use of traders/customers in the markets.

The statement reads in part, “Following the continuous closure of Bank premises across the state on Monday’s for the past few weeks and the grave economic and social implications of such on business and persons resident in the state, I am directed by His Excellency the Executive Governor of Anambra State to convey government’s firm resolve not to tolerate such henceforth.

“Accordingly, the government of Anambara state hereby directs that all branches of commercial banks operating within the state be opened for business on Monday 13th September, 2021 and remain open on all subsquent Mondays.

“You are to note that any bank branch which does not open as directed would be sealed by government and stopped from further operations in the state for the rest of the week. A second default would however attract a parmanent closure of the branch by government.

“Banks with branches in major markets across the state are to particularly ensure those branches open accordingly for the use of traders/customers in the markets.

“The State Government assures all banks of the provision of reinforced security by the police and other security agencies for all banks to enhance their operations. Please be guided accordingly.”