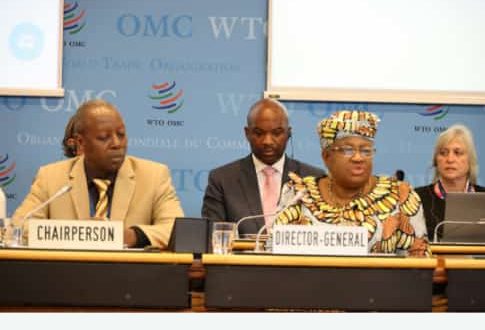 WTO Provides Nigeria, Others With $3.81m To Boost AfCFTA Implementation

The World Trade Organisation has spent $3.81m to help African countries build their capacities to implement the African Continental Free Trade Agreement and the trade bloc said it is willing to do more.

The Director-General of the WTO, Dr. Ngozi Okonjo-Iweala made the disclosure on the sidelines of the World Economic Forum in Davos.

African countries are leveraging on the AfCFTA as one of the flagship projects of Agenda 2063.

The objective of the AfCFTA is to boost intra-Africa trade, especially trade in value-added production.

The continent also hopes to contribute more to global trade through the AfCFTA.

THE WHISTLER can confirm that 54 countries have signed the AfCFTA as of January 2023.

Okonjo-Iweala told local media, Arise, that, “It is important and of course it is just beginning. I know that eight or seven countries have started trying to trade under the protocols and then that is at the beginning. What we need is for all our countries now that most of them have ratified the agreement to actually put it into practice.

“It will help solve a lot of problems. We have a big market and we can move within such a big market, imagine if we can manufacture things or add value to our agricultural products for instance, and trade within the area of 1.4 billion people, for now, that is huge.

“So, my view is that intra-African trade is about 15 0r 16 per cent, we should look into doubling this within the next decade.”

The AfCFTA is believed to lift 30 million people out of poverty by 2035, while the income boost in Africa will hit $450bn.

The WTO boss said, “African Continental Free Trade Area will be very important and the WTO is working through the African Union to support many countries.

“We will continue to do that depending on the demand we have from the African countries.”