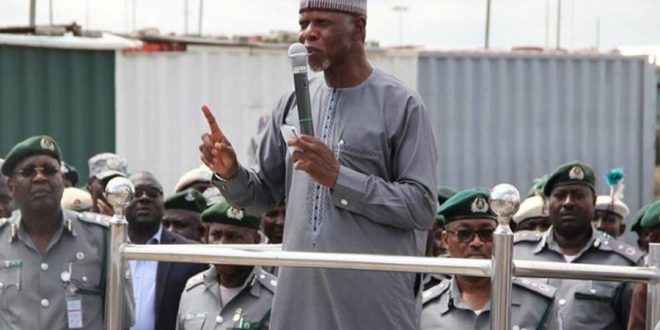 The Comptroller-General of Customs Col. Hameed Ibrahim Ali (Rtd) has ordered an investigation into the cause of the accident that led to the death of some suspected rice smugglers and its officials.

Eight people have been confirmed dead and over 20 others injured after a Hilux van of the Nigeria Customs Service rammed into a people by a roadside in Jibia town of Katsina State early Monday morning.

Jibia is on the Nigerian border with Niger Republic and many of its residents engage in cross-border trades.

Multiple sources in the town said the accident occurred while some customers officers were pursuing a J5 Peugeot bus they suspected was involved in rice smuggling.

“The driver lost control of the vehicle and ran into people standing by the roadside.”

“Six people died immediately while the injured were taken to a hospital in Jibia. I was told that more of them have died but I cannot confirm that because I did not follow them to the hospital,” a resident of the town, Almustapha Danye, said.

But reacting to the incident, the NCS in a statement issued by the Public Relations Officer, Mr Joseph Attah said the entire members of staff of the Service are deeply saddened by the unfortunate operation accident that resulted in the death of the officers.

The statement reads in part, “As a responsible Government Agency, we are mindful of the duty of care imposed upon us to ensure the safety of our citizens.

“Unfortunately, our efficiency is sometimes undermined by unanticipated failures in our equipment as in this case which was caused by break failure resulting in the death of Eight (8) fellow Nigerians and injuries to others at the border town of Jibiya, Katsina State.

“Nigeria Customs Service shares in the pains of losing these compatriots and extends heartfelt condolences to the immediate families of the deceased, Government and the people of Katsina State.

“The Service is doing all it takes to get the best treatment possible for the injured and will do what it can to ameliorate the pains of those who lost their loved ones.

“Even though, human actions cannot always keep society accident free, the CGC has already directed holistic investigation into the incident with a view to preventing a reoccurrence of this unfortunate accident in the future.

“NCS therefore calls on all well-meaning Nigerians to show understanding of the situation and offer words or actions that can help heal those in pains. As a Service, our hearts and prayers go to the families of the bereaved and those in hospitals.”