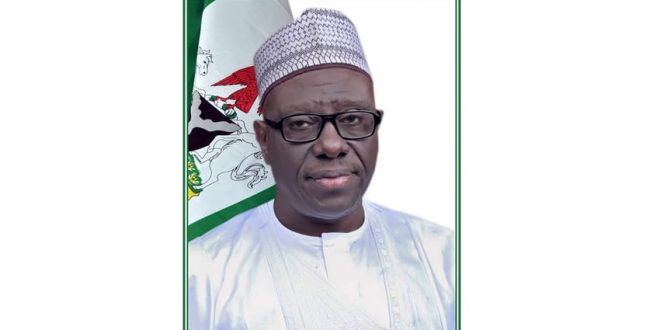 A former Permanent Secretary in the Ministry of Niger Delta Affairs, Aminu Bisalla has been bestowed with the National Award of Officer of the Order of the Niger(OON)

He was conferred with the title at an event presided over by President Muhammadu Buhari.

Right from childhood, Bisalla had always identified with lofty ideas like those of Martin Luther King’s clarion call such as “if you are a painter,paint even as Michallengo did and Beethoven composed music”.

He heeded this admonition and it showed clearly in his public service career.

After his National Youth Service Corps in 1984,he was retained and employed by the Niger State College of Education as Lecturer/Head of Business Education Department from where he left in 1988 to join the banking sector.

He served with Savannah Bank, Commerce and United Bank for Africa before joining the Federal Civil Service.

The Professionalization of the Civil Service brought Bisalla along with others as Chief Accountant in the pool of the Accountant General of the Federation.

By dint of hardwork and determination, he experienced steady progress in the civil service and left worthy legacies everywhere he served.

In between, he was appointed Executive Director, Finance and Accounts with Federal Roads Maintenance Agency(FERMA) from 2006-2009, he also served as Director of Finance and Administration at the National Biotechnology Development Agency (NABDA) and National Pilgrims Commission.

He achieved the same feat at the National Biotechnology Development Agency(NABDA).

By merit, he was appointed Permanent Secretary in September 2014 and deployed to the Police Service Commission.

At the inception of the current administration and the consequent redeployment of Permanent Secretaries, Bisalla was moved to the Federal Ministry of Industry,Trade and Investment in 2015.

He was Permanent Secretary at the Federal Ministry Of Niger Delta Affairs until July, 2019 when he retired from the Federal Civil Service.

Bisalla is a recipient of many awards both for selfless community service to exemplary contributions to public service.

He was conferred with the National Productivity Order of Merit Award last year by the President, Muhammad Buhari.

Aminu Aliyu Bisalla is a lover of sports.He plays basketball and table tennis and he is happily married with children.