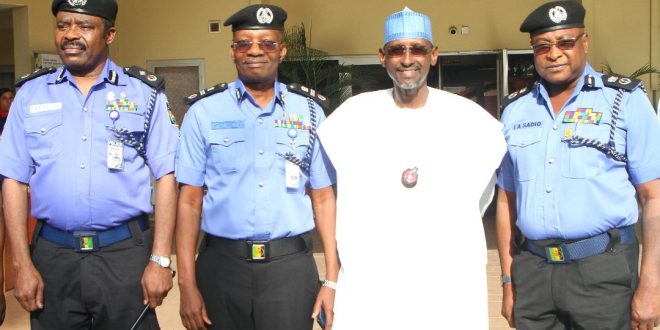 Keep Up The Fight Against Crime In FCT, Minister Tells Police

The Minister of the Federal Capital Territory, Malam Muhammad Musa Bello has charged the new Assistant Inspector General (AIG) of Police in charge of Zone 7 Headquarters Abuja, Kayode Egbetokun to keep up the momentum in the fight against crime and criminality in the nation’s capital.

The Minister made this charge when he received a delegation   of senior police officers from the zone led by the AIG on a courtesy visit to the FCTA on Wednesday.

The Minister said that a lot of progress has been made in the fight against serious crime such as kidnapping especially in the rural areas of the FCT with the arrest of kidnappers as well as their financiers and supporters.

This, Malam Bello said has led to the rescue of many victims and called on the AIG to ensure that the progress recorded continues.

In the words of the Minister “I want to say that within the recent past, a lot of progress has been made by your officers and men, starting from your zone, the Command of the FCT, as well as the DPO levels and I think this is very commendable.

“The issue of kidnapping had been of grave concern especially to our rural communities. I’m very happy that tremendous success has been recorded in the last few weeks, resulting in a lot of releases, rescue and also arrest of those who are involved, including their financiers and their supporters. I pray that this continues.

He said that the relationship between the FCT Administration and the police Zonal Command is a very long symbiotic partnership in which the FCTA will continue to provide the needed support and requirement to the police to enable it effectively carry out its responsibilities, which will ultimately augur well for the country and send out the right signals to the international community.

He urged the new AIG to work hard in his new post and wished him the best saying that serving in the FCT has a lot of advantages.

The Minister said “Serving in the FCT has a lot of advantage. If you work very well, easily, it is seen. If you look at the history of all those who served as AIG Zone 7, most of them ended up being propelled to higher responsibilities. My prayer to you is that you will serve well here and may God make it easy for you and make you have a very successful tenure.

Speaking earlier, AIG Kayode Egbetokun said that the primary purpose of his visit to the FCTA was to express his appreciation to the FCT Minister for his commitment to ensuring security in the FCT and for the support granted to Zone 7 and FCT Police Command, especially for the operational vehicles given to the police in 2022.

Reiterating the commitment of the Zonal Command to ensuring security of the FCT, AIG Egebtokun said “We are improving on our deployment every day. We are doing our best and working so hard to ensure that there is efficient utilization of resources available at our disposal.

Also present at the courtesy visit were the FCT Commissioner of Police, Idris Abubakar Sadiq, the Chief of Staff to the Minister, Malam Bashir Mai-Bornu, the SSA on security to the Minister, Amb. Salihu Mohammed, Director Department of Security Services, FCTA Mr Adamu Gwary and other senior officials of the FCTA and the Nigeria Police Force.