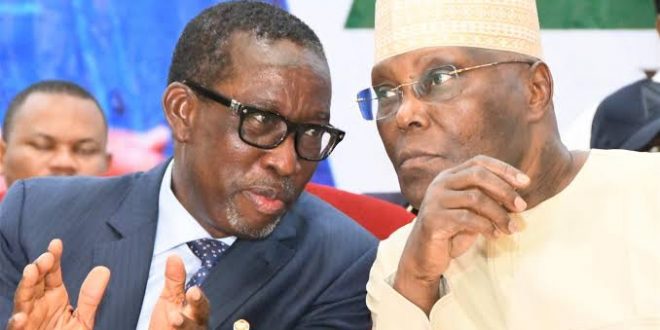 The Peoples Democratic Party presidential candidate, Atiku Abubakar, on Thursday, said actions were being taken to unite the party and calm all aggrieved members after the fallout that greeted the choice of his running mate.

This as he also said he had resorted to fast and prayers to seek God’s direction after the emergence of Delta State Governor, Ifeanyi Okowa, as the running mate to Atiku ahead of Wike.

Ortom, who said this during an interview on Arise TV on Wednesday morning, said it was surprising that Atiku could jettison the recommendation of 14 out of 17 members of the committee that recommended Wike as his running mate.

When asked if he supports Atiku, he said, “I told you I am praying. I have gone into hibernation and I am fasting and praying. So, in the end, if God directs me to support Atiku, why should I not do it? After all, he is my party man.

“But I am waiting for him (Atiku) because there are more things he is expected to do. I expected him to reach out to Wike who came second and he denied him the popular view of PDP members. 14 out of 17 members say that Wike should be the VP but in his wisdom, he chose Governor Okowa. Governor Okowa is a nice man and my friend and I have no problem with him. But if we are in a democratic era, and 14 people out of 17 said that it should be Wike, and he (Atiku) in his wisdom gave it to Okowa, I expect more explanation, I expect him to talk to Wike first, I expect him to even reach out to some of us so that together we can work as a party.

“But the bottom line for me is that I have gone into hibernation and I am praying and at the end, whatever God directs me, I can assure you that I will do it.”

But responding in a series of tweets on Thursday, Atiku, who is Nigeria’s former vice president, said the party would remain united despite the disagreement.

“The #OfficialPDPNig will remain united. Focus on our actions. We are taking action to address the feelings of all party members. The unity in our community is my priority. Our resolve to unify Nigeria starts in our party and moves to the community, then on to society.

“Every Governor, Legislator, and other elected officials produced by our party, and party members and loyalists, are much loved and respected by me.

“When they speak, I listen. I do not only listen. Appropriate actions have been taken, are being taken, and will continue to be advanced. -AA,” he tweeted.

Atiku had after announcing Okowa as his running mate clarified that he picked the Delta governor because he had the qualities to be a President, adding that he “is a President-in-waiting.”

Previous  Succour as FG engages lawyers for Ekweremadu
Next Buhari in Portugal: Count me out, I won’t interfere in 2023 elections