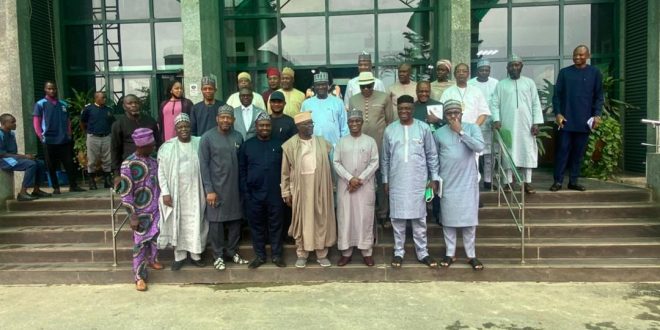 The House of Representatives Committee on Commerce says the Corporate Affairs Commission (CAC) has been breathing fresh air since assumption of office of Alhaji Garba Abubakar as Registrar General.

The comment was coming after the Committee’s oversight visit to CAC offices around the country.

The CAC said in a statement issued by Rasheed Mahe, Head Media, that the Commerce Committee Chairman, Honourable Femi Fakaye accompanied by members to wrap up the oversight at the Commision’s headquarters in Abuja on Thursday noted that against all odds, Alhaji Garba Abubakar was keeping the Agency afloat by turning things around in accordance with his earlier pledge to the National Assembly.

Femi Fakeyi who described the CAC as one of the vital organs that give life to the Nigerian economy and prayed that the RG would ensure that the trajectory of positive results was maintained for economic growth.

He used the forum to clear what he called misconceptions by some Nigerians about the role of the National Assembly under a Democratic setting.

Fakaye said contrary to such misconceptions, the legislature was vested with powers that include oversight, investigation, and summons amongst others.

In their separate contributions, members of the Committee including the Deputy Chairman, Honourable Richard Gbande, Hon Ado Sani Kiri and Hon. Dr. Haruna Mshelia amongst others took turns to share their experiences about the visits to CAC offices around the country.

While they were unanimous about the remarkable overhaul witnessed in most of the offices, they however charged the Commission to review and revisit certain areas that were in need of more attention as they observed.

Worthy of attention according to the members was the creation of sustained public awareness on the activities and achievements of the Commission with special emphasis on the rudiments of ensuring successful online registration of companies.

The Registrar General/CEO of the Corporate Affairs Commission, Alhaji Garba Abubakar in his response reassured of his commitment to sustain and improve on the gains so far recorded.

Garba Abubakar who described the year 2020 (Covid-19 era) as the best year for the Commision in terms of revenue generation and remittance however lamented that slash in fees was negatively affecting some of its operations.

He stressed that in view of a dedicated and committed workforce, the Commision was able to surmount most of its challenges, achieve set targets and objectives.

According to the Registrar General, the Commision would continue to ensure improvement of its workforce through the provision of adequate working tools, conducive working environment as well constant training and retraining of staffers within available resources.

Garba Abubakar who painstakingly spoke on the reform initiatives of the Commission, said the Commission was on the verge of deploying a Customer Relationship Management (CRM) solution to beep up its customer service in line with global best practice.

Highlights of the visit include guided facility tour which include the Status Unit, Special Projects Unit SPU (the largest unit in the Commision) and the Server room.

Previous Whittle down ethnic cleavages pulling us apart, Jonathan urges leaders
Next We are decimating top echelon of ISWAP and Boko Haram–FG