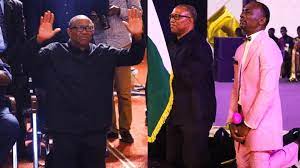 My Attendance Of Churches Not Political—Obi

The Presidential Candidate of Labour Party, Mr. Peter Obi, has described as uncharitable, the reports credited to Gov. Ifeanyi Okowa accusing him of dragging the Church into politics on the sole reason that he attends Church programmes.

Obienyem said in a statement on Friday that it was on record that Obi attended programmes he was invited to, including those organized by the Churches.

He asked “Should Obi start shunning Church events because of politics, even when we know that since leaving office in 2014, that Obi has visited over 1000 schools and hospitals owned by the Churches, offering them all manner of supports for the upgrade of their schools and hospitals that serve the citizens of Nigeria.”

Obienyem cautioned against bringing the name of the Church into disrepute, saying those doing such were ones linking genuine actions of patriots to politics, even when it was absolutely unnecessary.

Obienyem, who also said that the reference to politics was unnecessary because campaigns had not started, disagreed with Okowa.

He said, “Why would Okowa suggest that it is wrong for anybody to reach out to the Churches?

“Is this not contemptuous of Churches? Everybody is affected by the bad governance in the country and should expectedly be involved in the efforts to enthrone good governance.

“He should be told about the difference between being politically aware and getting involved in active politics.”

Obienyem said, very soon critics would start to criminalize the encounter Obi is having with Nigerians in Diaspora.

He assured Nigerians that Obi would not get tired of preaching to Nigerians about good governance and the need for the people of Nigeria to take back their country.

Obienyem called on other patriots to join in the crusade rather than wishing people to keep quiet so that the status quo would remain.