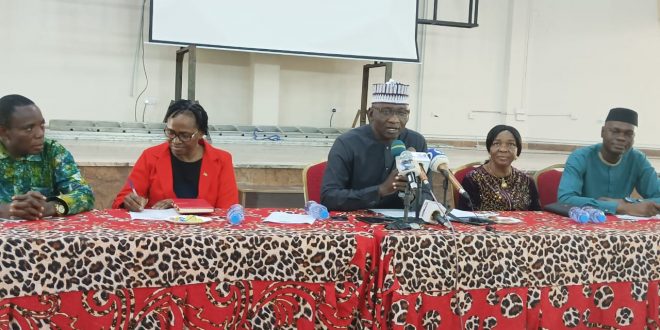 The Nigerian Export Promotion Council has called for the support of the media to drive the economic diversification mandate through repositioning Nigeria’s non-oil export.

The Executive Director/Chief Executive Officer of NEPC, Dr Ezra Yakusak, made the appeal at the media retreat for Commerce and Industry Correspondents of Nigeria (CICAN) in Abuja.

The retreat organised by the NEPC has as its theme: “Diversifying the economy: The role of NEPC.”

Yakusak said the retreat is being organised to deepen the knowledge and understanding of NEPC’s mandate as an agency responsible for the development and promotion of non-oil export.

This mandate, he added, is key to realising the economic objectives of the present administration which is targeted at diversifying the economy from a monolithic to a robust economy driven by the non-oil export sector.

The NEPC Boss said, “I wish to inform you that the NEPC is poised to build and sustain a mutual-beneficial relationship with our esteemed members of the fourth estate.

“This is premised on the fact that as conveyors of information, the media has a critical role to play in not just promoting NEPC activities and programmes but also creating awareness on opportunities in the non-oil sector.”

Yakusak said that the media has a crucial role to play in sensitizing Nigerians on the need to embrace export as Nigeria’s means of survival as a nation.

He added, “I am optimistic that through your incisive and analytical reports on happenings in the sector, NEPC is more than ever before determined to reposition the sector for better performance.

“Indeed, the power of the media cannot be over -emphasized. Put differently, the press has the power to inform, educate, entertain, act as watchdog for the society as well as set the agenda for national discourse.

“Therefore, as information and communication professionals, you have a great responsibility to set the agenda for national conversation towards issues that are critical to the well-being of the citizenry.

“And you will agree with me that what matters most presently is the need to promote the ‘Export4Survival’ campaign.”

He urged Nigerians to realize the urgency of engaging in non-oil export trade as a viable means of economic growth and poverty alleviation.

According to him, non-oil export trade has the potential to promote industrial development and boost foreign exchange earnings.