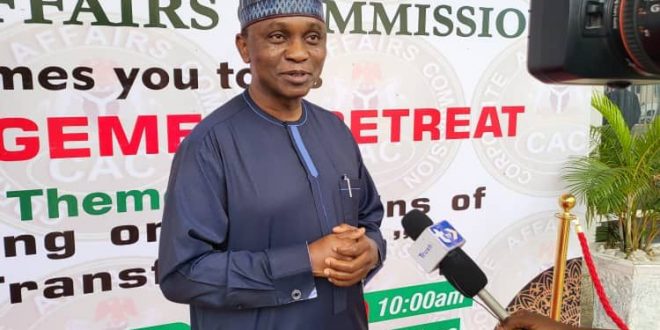 In its continued bid to ensure efficient services to Customers, the Corporate Affairs Commission (CAC) says training and re-training of Staff in all sectors of its operations will continue to receive priority attention.

The Registrar General/ CEO of the CAC, Alhaji Garba Abubakar stated this at the just concluded 2022 Management Retreat held in Kano with the theme: “Corporate Affairs Commission: Consolidating on the Gains of Digital Transformation”.

Alhaji Garba Abubakar who noted with pleasure that the Agency was blessed with highly talented and committed skilled personnel who work outside office hours to approve applications from customers.

He therefore revealed that this year the Commission would surpass the 583 number of staff trained in 2021 and train 700 by the end of 2022.

Garba Abubakar further stated that more staff of the Commission would also be empowered with working tools some of which were to be provided courtesy of the World Bank to enable them grant registration approvals even outside of working hours.

The Registrar General enjoined CAC Staff to re-dedicate themselves to duty and charged officers handling approvals to exercise caution to guard against avoidable errors.

While speaking on the Commission’s reform initiatives, the Registrar General revealed that its integration with the National Identity Management Commission had reached advanced stage.

When implemented, Abubakar said the CAC may only require NIN enrollment numbers and not signatures to process registration applications as obtained in other jurisdictions.

While speaking on the new insolvency framework pursuant to CAMA, 2020 , the CAC Scribe enjoined legal practitioners to exploit the enormous potentials provided by the new legal arrangement .

The two-day gathering entertained series of presentations including “Update on the Implementation of the 2021 Management Retreat” by the Chairman of the Retreat Planning Committee, Duke Ukaga (Director, Public Affairs), “Current Innovations on the Companies Registration Portal (CRP)” by Priscilla Orukpe of Oasis Management Company Ltd, “Ease of Doing Business: The Rwandan Experience” by Solomon Asuquo (DD, Head Internal Audit).

While all the papers were subjected to scrutiny, some of the discussants who were external users of the Companies Registration Portal Ozeigbe Osagie Ekhator Esq. (Abuja based) and Kabiru Auwal Sallau, ACA (Kano based) provided incisive feedback on their interface with the CRP.

Both users were unanimous on their submissions by applauding the Commission’s reform initiatives and charged it to ensure continued improvement in service delivery to the admiration of valued customers.

In a vote of thanks, the Director Customer Service, Mrs. Ifeoma O. Isaac applauded the reform initiatives being championed by the Registrar General.

Ifeoma Isaac who extolled the leadership qualities of the Registrar General prayed Almighty God to preserve him as well as continue to grant him the wisdom to steer the Commission to greater heights.

A 31 point Communique was issued at the end of the two-day CAC Management Retreat in Kano.